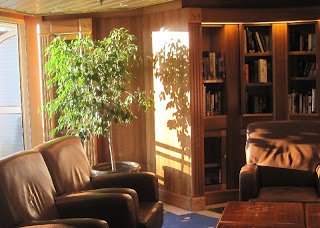 
LEAFY LIBRARY
When first I ventured on a cruise
I felt some trepidation
Would it all be 'jolly-hockey-sticks'
With no time for contemplation?
Would I be required to join
In ghastly conviviality,
Full of wine and women and song
And too much joviality?
Would I be the odd one out
When it came to joining-in?
Would I be forced to enter games
Which I could never win?
Would someone grab me and throw me in
The deep end of the pool?
Would I be persona non grata
If I didn't play the fool?
I recalled the English holiday camps
Of the country of my youth!
All that 'Wakey wakey! Rise and shine!'
Seemed desperately uncouth!
But I need not have worried;
See the gentle view above;
A corner of the Library
Which I really came to love.
I went there to write poetry
Or to read a magazine,
While idly gazing at the sea
And the pleasantly passing scene.
In case you think I'm a spoilsport
I really did have fun,
Mostly meeting new people
And chatting to everyone.
I even tried Line Dancing
And Trivia Games as well,
Though not too hot at either one
I enjoyed them, truth to tell.
But listening to a Guitarist
In pleasant company,
And visits to the Library,
Were the greatest things for me.
*
------------------------------------------------------------------------------------

FORGOTTEN STREETIt may not look neglected as it sports its Springtime finery. It may not look depressing as the shoppers stroll around.But, even so, in Hunter Street, they have to face the changing times;Most shoppers have gone elsewhere; these days very few are found.They've rushed off to the Shopping Centres, springing up on every hand;Every suburb has, it seems, a shopping monument.One by one , the shops have closed, yes, even the Emporiums,Folk have moved to other lures where money can be spent.Yet friends, who shopped in Hunter Street, say, maybe fifty years ago,Remember such a vibrant place, the centre of the town!They recall the weekend jaunt when people  dressed in fineryAnd went out into Hunter Street to wander up and down.Now the largest store is moving; it will leave a great big, gaping hole,And the building may lie derelict, an eyesore possibly.I suppose it doesn't matter much; life has a way of moving on.It is just a minor sorrow; just a little tragedy.*
Posted by Rinkly Rimes at 7:32 AM

I always love the library on cruise ships. Nobody's making a lot of noise, and the chairs are comfy. On our last cruise, our friend at Viking River Cruises apologized because they only cabin left was on the main deck, near the library. I said "Good, that's just where I want to be."
And I always feel so sad to see the old downtown area of a city fall into dusty disrepair because large shopping malls have opened near the new housing developments.
Sigh.

Lovely how you recount your fond memories through poetic expressions. Full of emotion and nostalgia. Been a pleasure reading your blog.