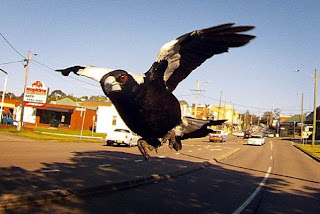 
Out of a blue non-threatening sky a Springtime bird descends.
And he isn't coming your way because he thinks you're friends!
A chicky little garden bird that hops among the flowers?
No! A magpie is a creature with very martial powers!
In Springtime he's the scourge of all who come within his reach
Descending like an eagle with a very scary screech.
First, he's after human hair to line his little nest.
Later on it's parenthood that puts us to the test.
He or she guards precious eggs with hovering ill-will;
Suspecting every passer-by and swooping to the kill.
The beak is long and razor-sharp  delivering injuries
That sometimes need a stitch or two! That's just the way it is.
Bike-riders wearing helmets are protected from the swoop
But walkers have to cower when a magpie loops the loop.
Some wear empty ice-cream cartons upside-down in case
A magpie should decide to dive and disfigure a face.
Australia's full of nasties......take snakes, and then take sharks.
But as an angry predator the magpie gets top marks.
*
--------------------------------------------------------------------

HOT STUFF!
Oh what a trap for the unwary!
A thought that's positively scary!
The fact that millions of years ahead,
After you and I are dead,
The sun will engulf the earth! It's true!
That is what it's going to do!
As it dies the sun will expand!
(Yes, I know it's hard to understand).
The earth will be swallowed-up by heat
And we will all admit defeat.
If mankind is still around
Into the oven we'll be bound!
This isn't imminent, of course;
Life is still a powerful force
And, in the event, should we survive,
It could be that we'll contrive
To tamper with an asteroid,
To spin us into a cooler void.
That would not exactly be a boon,
As we'd have to leave behind the moon!
Let's leave that worry to generations
Who'll have to deal with such situations!
Let us just enjoy our privileged place,
On earth, right heat, right time, right place!
*

My good friend, Pam (I have to call her that because she's giving me a lift next week!) has, at last, found her way to my blog. And, straight-away, she's complaining! 'Where are the photos of today?' she says! She's nagging already. She'll have to learn that I'm always a day behind with photos.
Next week about forty of us are heading down to the South Coast to a place called Merimbula for about five days holiday. Shirley, our very efficient organiser, had a get-together for us all at her house today and I took a few photos, when I could spare the time from eating and drinking. 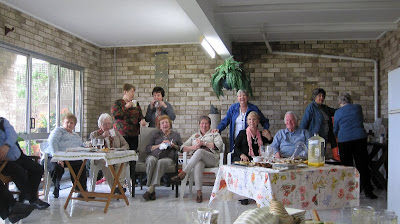 This was just one end of the room. There were more men at the other end but this was the best photo.
The men will be outnumbered on the trip but at least there will be enough of them to gang-up on the ladies. Pam, the complainer, is in the pink scarf. Unfortunately, she's not coming on the trip as she's having visitors. She'll be missed.
And don't expect a personal message every day, Pam!
Posted by Rinkly Rimes at 7:20 AM

that Magpie photo is very cool
and totally seasonal in the footy world too - do you barrack for the 'pies?

Hi there - great picture of the Magpie. I wonder how it was taken.

That magpie shot is awesome!

Excellent capture of that bird.

magda and crew in australia said...

Hello Rinkly Rimes,
Absolutely love the wonderful photo you achieved of a Maggie. Shows so well the seriousness of Maggie when in such moods.

And your Hot Stuff poem is delightful, a bit gruesome too, so it is good to be enjoying the now, and to give Earth and Moon a thought hug to know they are loved.

Enjoy your Holiday, reads like you will each be having a good time.

Nice meeting you via SWF,
from Magda and Family in Qld Australia