The Noses Have It WE WRITE POEMS
http://wewritepoems.wordpress.com/2011/09/28/prompt-73-its-post-your-poems-day/
asks for a poem about Smells
THE NOSES HAVE IT!
They tell me that an Eskimo
Has hundreds of words with the meaning 'Snow'
And that seems just a little bit excessive.
But you and I have quite a few
Connected to what our nose can do;
Our playfulness with 'smell' is quite impressive.
Let's take 'smell,' itself, to start;
We can smell an apple tart,
But, also, something not at all delicious.
We can smell that doggy-do
On the bottom of our shoe,
And that's a smell that really is pernicious.
So 'smell', the word, is good or bad,
Making us either mad or glad,
According to the type of smell referred to.
The sense of 'smell' is simply bland
Accepting whatever is on hand;
It's simply something we've attached a word to.
But take a little word like 'stink'!
The thought of it can make us shrink,
Rejecting the foul experience completely.
It conjours up some ghastly mess,
Emitting foul unpleasantness,
Certainly nothing to smell at all like sweetly.
'Odor' is next on the smelly scale;
Think of old socks (from a male),
Think of food that's left refrigerating.
This will make us hold our noses;
Even shout out 'Holy Moses!'
It often leads to things incriminating.
Then there's 'aroma', a cooking smell
Which often casts a delicious spell
As it wafts noseward from the kitchen stove.
Aroma speaks of warmth and food,
And puts us in a pleasant mood,
As though we've found an edible treasure-trove.
Then we come to a neutral term;
Some 'scent' can make a human squirm
While being to a dog quite fascinating.
Meanwhile the scent of a pretty flower,
Not designed to overpower,
Can be both gentle and exhilarating.
Finally, there's 'perfume' ; well,
It is so much more than 'smell';
It has the power to drive us to distraction.
Sprayed behind a lady's ears,
It can reduce a man to tears,
As it adds so much to sexual attraction.
That word 'perfume' is so erotic,
Making human love exotic,
Casting a crazy and romantic spell;
'Stink' and 'perfume are poles apart;
One is gross, one from the heart.
And both of them are, very simply, 'smell'.
*
----------------------------------------------------------------- 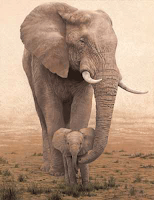 THE TENDER TOUCH
That one so large and one so small
Can walk in harmony at all,
Is miracle enough for me!
That one built sturdy as a tree,
So huge, so wide, so vast and high,
And reaching almost to the sky,
With ears that flap and feet that pound
Making an almost thunderous sound,
Can be so gentle! Contemplate
The baby with its awkward gait!
See how it plods with infant strides
Keeping close to mother's sides!
Her vast feet could eliminate it!
Yet see how softly she'll placate it!
The coiling trunk gives a gentle nudge,
Indicating 'Stay!' or 'Budge!'
Her trumpet sounds a 'Yea' or 'Nay'
And her offspring knows to go or stay!
'The fruits will ripen soon and so
This is the way we have to go.'
He heeds the looming beast above
Revelling in his Mother's love.
What makes me stop and marvel so?
He was only born an hour ago!
*
Posted by Rinkly Rimes at 2:38 PM

wow, what an elaborated yet fun poem about smells. i loved it.

Your talent amazes me and I'm a bit envious. How I wish I could bring word play together to form an array of sunshine not dismay. For when I put pen to paper in this fashion then it's a waste of effort and quickly trashed. And, if you delete my comment I will understand why because even in it I can't even make it rhythm. :(

Such wonderful writing, as always. I love the pictures!!

That was soooo fun to read. It was even better out loud. Thank you so much for participating in the prompt.

Not a hundred words for smell, but that's quite a start. Animals certainly have us humans beat, when it comes to hitting the ground running.