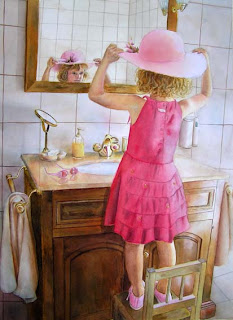 
PRETTY IN PINK
Why is this picture charming
When other ones just stink?
The child is pre-pubescent;
The colour is girlie pink.
But the picture above is natural,
So are the childish clothes,
So is the unaffected
Little-girlish pose.
All of us, as children,
Tried on Mummy's hat.
There was nothing tawdry
Or suspicious about that.
*
But there are other little girls
Who're dressed really over-the-top;
Fake tans, fake smiles, fake everything;
Like a Lady Lollipop.
The fake tan is so obvious,
As is the practised smile.
The eyes are made-up heavily;
There's simpering all the while.
And if we see the movements,
As we do on our TVs,
We'd see more sexualisation.
Children who learn to tease!
The dresses may be gathered up
To resemble tiny bras,
They're not little girls, as such;
They're little apprentice Stars!
The mothers live-out their frustrations,
Their disappointments, and then
They dress-up their dear little daughters
So they too can be sexy again.
*
'Pretty in Pink' is charming,
If childishness is involved,
But exploitation's a problem
That I'd like to be solved.
*
------------------------------------------------------------- 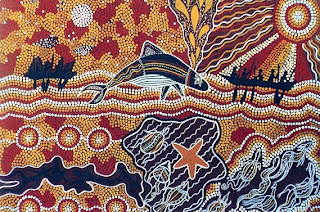 An Aboriginal myth from Australia
JOURNEY.
Way back in the mists of time, before the world grew old,
Many wondrous stories of Australia's birds were told.
Australia was a land of birds, no animals were there,
And every bird was beautiful and quite beyond compare.
Migration still occurred, my friends, and birds would sally forth,
Returning to their nesting grounds and other places North.
They told the people that they met of the lovely land they'd spied,
That had trees and mountains, hills and vales, and rivers deep and wide.
'Let us journey to this wondrous place!' the people then declared,
But for such a mighty journey they were none of them prepared.
Only one creature had a boat, that creature was the Whale,
And the people asked to borrow it, but they could not prevail.
So a plan was made to steal the boat while the great Whale was distracted
And the wily little Starfish was for this task soon contracted.
The Starfish soon attacked the lice that swarmed on the great Whale's skin,
Picking them off around the tail, the large mouth and each fin.
So, while the Whale was thus relaxed, with the Starfish ministry,
The people stole the boat away, and set off on the sea.
The Whale at last saw through the trick and then became alert.
He whipped and lashed the Starfish and oh how the whipping hurt!
The Whale sped after the people but they traveled at great speed,
Reaching Australia and, for sure, it was wonderful, indeed.
The Brolga, such a regal bird, stamped repeatedly
Upon the boat and soon it sank into the raging Sea.
Ganman-Gang, the island, reveals where the Whale's boat sank,
And for that beautiful island it's the Brolga we must thank.
The Whale, meanwhile, left stranded, has to follow its destiny,
Swimming back and forth along the coast for all eternity,
Searching for its long-lost boat which will never sail again,
And viewing the coast of Australia, and its birds and beasts and men.
And still we see the great whales swim, returning every year,
And still we gather on the coast to watch when they appear.
And still the Starfish bears its scars, we see them to this day,
Reminding us that traitors always have a price to pay.
*
---------------------------------------------------


VISIT ME AT
http://rinklyrimes.blogspot.com/2011/09/scrapbooking.html
for a great prize.
Posted by Rinkly Rimes at 6:35 AM

I agree about the exploited children. It's an awful situation and should be outlawed. I'd even go so far as to call it child abuse.
I love the picture accompanying the aboriginal legend. It's gorgeous, and the legend reminds me of many told by the aboriginal people of North America.
— K