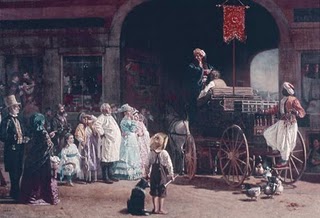 QUACK QUACK!
Quackery has existed since the very dawn of time;
Applying false medications has always been a crime.
And yet there lurks in the human soul a desire to 'give it a try',
Whether it's a cure for cancer or some ointment for an eye.
'Are you feeling feeble?' the Practitioner  would bellow.
'You seem to have distemper, you poor ghastly-looking fellow!
Come! Drink this magic potion down! I predict you will be cured!
Your dreadful situation need no longer be endured!'
So money would be handed-over, the potion would be downed
As all the other believers, in a circle, stood around.
*
The Quack Doctors kept moving on in an earlier age,
Escaping out of town before they had to face the rage
Of those 'patients' who had been deceived! None ever found redress!
And, to rank stupidity, none of them would confess.
*
Quack Doctors are still with us, but now they 'live' on-line,
Suggesting they can cure the flu that's brought to us by swine,
Or offering to enlarge the parts we may consider puny,
Or suggesting embrocations which are bordering on the looney!
Their 'quack' is a very silent one, but they're 'quacking' just the same,
And millions of silly people are assisting in their game,
Sending off the money for the cures that do no good,
Giving the Quack Doctors a luxurious livelihood!
We continue just as gullible as the peasants of the past.
Let's try to prove Quack Doctors are finally outclassed!
*
Quote
The word "quack" derives from the archaic word "quacksalver," of Dutch origin  meaning "boaster who applies a salve" In the Middle Ages the word quack meant "shouting". The quacksalvers sold their wares on the market shouting in a loud voice.
*
----------------------------------------------------------


VISIT ME AT
http://rinklyrimes.blogspot.com/2011/09/scrapbooking.html
for a great prize.
Posted by Rinkly Rimes at 4:30 PM

I didn't know the derivation of 'quack' - fascinating. I'm gullible but guard against it, becoming a cynic instead - not sure which is worse.

Fun poem on things labeled glass--caution for sure! And the quacks are still thriving! Enjoyed the derivation of the word quack.

Quack Quack is so clever!