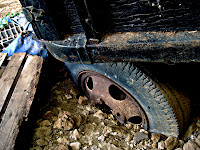 MAGPIE TALES
http://magpietales.blogspot.com/2011/09/mag-81.html
supplied the illustration
SAD SONNET
We speed along the highway known as life,
We're all agleam with chrome and steel and leather.
The wind along the way cuts like a knife
But we're inside protected from the weather.
The music blocks out all the painful thoughts;
The scenery beguiles us as we're travelling.
We have no reason to feel out of sorts;
We do not guess that life itself's unravelling.
Rejoicing in our youth and health we go;
The wheels spin underneath us, reassuring;
Light-hearted jokes spill from our radio;
The essence of ourselves  seems so enduring!
Then come the grinding brakes, the creeping rust.
All lovely journeys end......because they must.
*
---------------------------------------------------------

THE UNTOLD STORY
'The Crown Discarded for Love', or so the headlines said!
A future King, immersed in power and glory,
Giving up his throne for the one passion of his life!
It seemed, back then, to be a great Love Story!
I was a very small child, but a hazy recollection
Of drama, gossip, shock and adult woe,
Still lingers in my mind, as 'something awful going on',
A snapshot of those days so long ago.
Yet I have since found out that there was so much more
That ordinary people never knew.
The page of history turned and the archives have revealed
That the Great Romance was only partly true.
The Prince admired the Nazis, he thought Hitler was just great,
The Government was shocked and horrified.
To think he could be Monarch when the coming War arrived!
It was vital, then, that he should stand aside!
Behind closed doors in secrecy, they longed for Abdication,
In many ways they brought it into being,
While the British Public gossiped about sex and great romance,
It wasn't the true picture they were seeing.
*
Posted by Rinkly Rimes at 6:41 AM

Yes, and in our younger years (even now, in my case) we screamed "Road Trip!" as we hit the highway. How easy it was. How easy it could still be, if only we could ignore the street signs of warning!

The piece about Prince Edward was an education for me. I have never never heard this before....

Oh, yeah, so many secrets. Can you imagine if he had become king? (((shivers)))

I used to love driving. Now it is a necessity, and only when I can't avoid it.
I knew about Edward VIII admiring Hitler (not at the time, but years later), and wondered if he was eased off the throne.
It could have been awful. I wonder what Canada and Australia would have done if the King of England sided with the Nazis. Standing with the Mother Country is one thing when we believe she is right, but...no, it barely bears thinking about.
— K

Well at lest he followed his love in exchange of his position as to be a king. If he is happy then so be it! ^_^

Ah, but if we only realized in those younger days, taken a bit more care, maybe there would be less rust holding us together.

We rust on the inside, I think;-)
The Duke of Windsor was quite an unhappy man - exiled and reviled by family

Dear Brenda: If no one put their foot on the brakes; then maybe we'd all live forever! Great poem;
ny favourite line;

Light-hearted jokes spill from our radio;
The essence of ourselves seems so enduring!

The poem, "The Untold Story" I did hear about this and felt how everyone, even Lord Chamberlain to signed off with Hitler was caught up in the trap of the evil one's lie. Propaganda being the way it is done.. or it went much deeper than that and much more sinister. Scary thought; yes, very!

Both wonderful piece's of writing, each a real pleasure. Yes, it was avery romantic story ... but, I had read about the darker side. It did not stop their (or perhaps I should say begin there) ... there were the likes of the Mitford sisters and many more. Isn't the House of Windsor rather significantly intermarried to Teutonic stock?

I enjoyed both of these - I am afraid I have never had much sympathy for Edward - everything I have ever read on him - well he seemed like a pompous arse.

Gotta love "road trips" Loved both poems. The second one fascinated me. I adored the "King's Speech" ... Did you read a book regarding Edward?