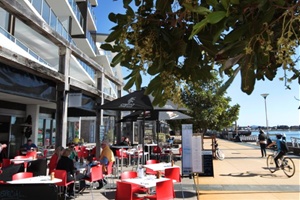 Newcastle
RESTAURANT RED
A restaurant by the River, where many folk are fed,
But what can be the significance of all that colour red?
Is it just by chance it's there? Maybe, but I know it's right
That the colour red enhances the eater's appetite!﻿
It must be a memory of blood, a rather nasty thought;
Maybe we're thinking back to times when animals were caught
And slaughtered as the tribe looked on, and blood ran on the ground.
I've no idea; but it's a theory that seems to me quite sound.
Psychologists vouch for redness as causing salivation,
So the restaurant-designer must have used this as his motivation.
*
------------------------------------------------------------------ 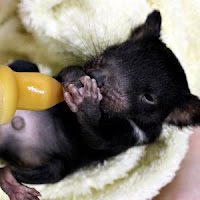 A DEVIL OF A PROBLEM!


Though you may feel all maternal when you see this little pup,

Tasmanian Devils are not the sort of animals to pick up!
As adults they are viscious, though not an enormous size,
And they fall upon each other with banshee shrieks and cries!
However, they are treasured because of their rarity;
Tasmania is the only place that they are found, you see.
But tragedy has befallen these ancient little creatures!
A tumour disease has beset them, destroying their facial features.
I wont display a picture of the ravages that occur,
Let me just say it's hideous, a bulge coming through the fur.
They live in packs and so, of course, they're very closely linked,
And, left to themselves, the Devils will very soon become extinct.
Now to the good news! Where I live the climate is the same!
An inland, mountainous region; Barrington Tops its name.
So an area has been set aside to breed a healthy group,
And it's hoped, in time, to nurture up a healthy natural troop.
It will remain for ever as a special National Park
And I love the name they've chosen; they'll call it The Devils' Ark. 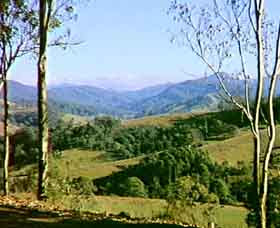 Barrington Tops
Posted by Rinkly Rimes at 7:12 AM