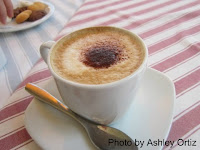 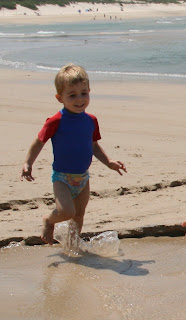 BIG SPLASH!
For a boy who was scared of water
It was quite a big success!
He found a boy-sized puddle
That fitted him, I guess.
He turned his back on the ocean;
It really was much too large.
He saw the shallow puddle
And decided to make a charge.
He'd defeat his fears in a moment;
In one quick triumphant dash.
And so, with a big grin on his face
He became a Water-Boy! Splash!
*
Posted by Rinkly Rimes at 4:36 PM

Labels: Writing in the Buff Creation

Excellent book blurb, Brenda. "H"imself, indeed.
Poor Milo, at the Home for the Bewildered. I am frequently bewildered in my own home.
— K

Dang! Isn't that they way it always goes ... after a huge and important discovery, they lock you up in a joint like The Sunset Home for the Bewildered, lol. Great story; and so is the one of the triumphant little boy; so cute.

The Knowledge sounds intriguing. I'd buy it just to satisfy my curiosity. FYI, I tried staring into my iced coffee this morning. Guess it only works with the hot stuff. lol

What a sweet photo and rhyme for your splash story.

Himself must have put something in his coffee besides sugar! LOL Great blurb. And I love your poem! The little boy is adorable.

I read this several times and loved it more each. First I thought his--excuse me, His--cappuccino was Milky Way flavored. Then I realized He was creating entire spiral galaxies! Oh, how I love how far out of the box this delightfully trippy one has traveled. "Big Splash" is wonderful, too.