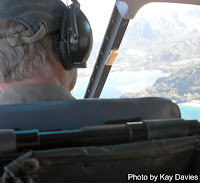 WRITING IN THE BUFF
http://www.writinginthebuff.net
supplied the illustration.

Would this blurb make you want to read this book?


SIGHT UNSEEN
by
E.S.P.J. Fallowfield V.C. (Ex R.A.F.)
It starts so innocently.
Clara wins a competition.
The prize........
'Enjoy an Experience never before enjoyed by anyone, anywhere.'
She becomes the passenger in a two-seater aeroplane flying over the Rockies.
It is only then that she understands the meaning of her prize!
The Pilot is blind!
Later still she learns that his ear-phones have ceased functioning!
He can no longer receive instructions!
Read on..........
ALSO AVAILABLE IN A BRAILLE EDITION.
The Principal: The School for the Blind; Throgmorton; My students have been inspired by this book!
'Give us a go!' they say.
*
-------------------------------------------------------------------
CARDIGAN'S CARDIGAN!
A 'cardigan', not 'haute couture',
Is a pretty dowdy thing for sure;
It droops, it drags, it swathes around the body.
Associated with lack of style,
Making 'Saint Laurent' run a mile.
As a fashion-statement, it is rather shoddy.
*
You wouldn't think it a 'tour de force'
Of the gent above riding on his horse,
And yet, in fact, he was the instigator!
You've heard of The Charge of the Light Brigade?
The Earl of Cardigan led the raid
And he was the very first cardigan creator!
*
The Earl himself was rather a 'rotter',
Well-known for being a 'copybook' blotter!
Divorced, as well, a scandal in his time.
While his second wife lay dying,
He didn't waste his time on crying;
He found another lady! Quite a crime!
*
The 'Charge' itself was an awful rout.
They scarcely knew what they were about,
And Cardigan, himself, just fled the field!
A third of his men were killed outright
And all the rest were put to flight
So, in the end, the British had to yield.
*
But Cardigan's name has long survived!
He found the Crimea, when he arrived,
Bitterly cold! He really couldn't hack it!
So all his soldiers had to wear
An addition to their underwear;
This was a sort of furry, sleeveless jacket.
*
The idea caught on, would you believe!
The ladies added in the sleeve,
They knitted various copies with a passion,
They kept on saying all the while
'I want a jacket Cardigan-style!'
And cardigans became the latest fashion.
*
So, though Lord Cardigan was a rogue,
His name has ended up in 'Vogue',
At least in all the silk-embroidered versions.
And all, from the poised to the fool-hardy
Sport at least one comfy 'cardie',
So don't let me hear you casting your aspersions!

I am giggling so hard!!! Especially the part about being available in braille. Too bad she didn't notice the white cane when he got on board. Guess he got his pilot's license over the internet. Liked your poem, too.

The title is perfect, and you certainly surprised me! There isn't an agent or publisher who could complain you don't have an incredible hook. Love the sensational tone. This is great.

So Lord Cardigan is to blame, eh? LOL I'm one of the guilty ones. I love my cardigans!

You are so funny! I'm glad that it is now available in Braille. Loved the lesson on cardigans too.