It is hard for me to imagine life in days of yore.
The history books make mention of a very strange thing called War.
It seems that, a thousand years ago, the world was in a lot of strife,
With people killing people, and little regard for life.
At last there came a World Leader, who was of a different breed;
She was utterly noble, in thought and word and deed.
She arrived in two-thousand-and twenty, and her influence was immense;
She ruled by the power of affection, that and common-sense.
In time the leaders of nations asked her to take over the reins;
'Rule the World!' they begged her, 'For we are living in chains.'
She became the first World Premier, revered and adored by all,
And in time she solved the problems that were holding men in thrall.
Since then the world has been peaceful, all of us in accord;
Gone are the terrible aeons when men lived by the sword.
*
I was scuffling through some fallen leaves in a meadow the other day
And there, at my feet, old and broken, the very last firearm lay!
It looked such an ugly item, a mere mechanical trifle,
But the local museum told me such an object was a rifle.
It now lies in the museum, where many visitors pass,
In a special show-case, displayed under special glass.
And the people stop and gaze at it and this is what they say......
'How could the people way back then have behaved in such an awful way?' 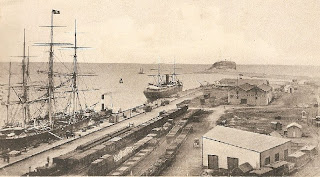 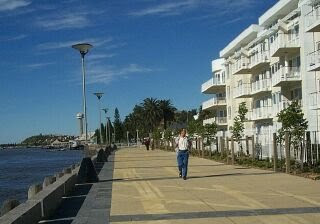 
'Nobby's' is the little island lying just off-shore
And Newcastle's a busy city, just as it was before.
The waterfront, on the other hand, has well and truly changed;
Everything about it has been utterly rearranged!
Gone is the noise and bustle, the shipping and the trains,
The dirt and lack of beauty, the coal-trucks and the cranes.
Instead we have a boulevard where citizens take their ease,
There are elegant apartments and the shade from planted trees.
Nobbys still stands sentinel and the lighthouse is still there
But the Waterfront's a benefit that all of us can share.
Optimism? Pessimism? Happy smiles or tears?
Will things improve or deteriorate in another hundred years?
*
Posted by Rinkly Rimes at 3:00 PM

As we always hear about the years before us, those were different times. Change is the only constant, so we'd better hope we're changing for the better.

Thanks for playing M.M.P.P. again this week. Your participation is always appreciated!