The Wordle
SUNDAY WHIRL
http://sundaywhirl.wordpress.com/2011/09/04/153/
supplied the Wordle above, from which we must create a poem
FEMOLUTION!
Women are no longer just birdlike and quivering.
Cowed by glances from the males, abject, pale and shivering.
They are Boadiceas, hordes of them descending,
With studded shields and helmets, the line comes, never-ending.
*Not for them the plate-rack; that sticks in their craw;
*You'll see them up there at the bar, and not drinking through a straw!
Sometimes there's a little hitch, sometimes they goof a bit,
But anywhere a female blooms she's going to be a hit!
* 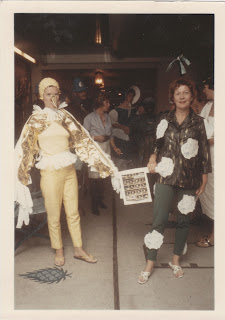 THE CANARY ISLANDS
Here I am with a 'Canary' a thousand years ago!
I look dull but she appears with a lovely yellow glow.
We were on a journey on a ship back to the old U.K.
And this was a Fancy Dress affair we indulged in on the way.
Leaving Africa behind we had to sally forth
To a cold green country known as Home some way to the North.
I was feeling very miserable though it doesn't really show.
I'd adored Rhodesia and I was loathe to go.
But my sister was terminally ill and my parents needed me
So I set off on the journey over the wide, wide sea.
I'd left behind good friends and sun; I knew not what lay ahead
And I viewed with future with alarm, and a certain amount of dread.
I was heading to a Winter; something almost forgotten.
In other words, I was sad, depressed and life felt really rotten.
But halfway through the journey a Gala Night occurred
And my cabin-mate (forgotten now) dressed up as a yellow bird.
I dressed up as an island; on my head there's a green palm tree!
In fact, I'm dotted with islands as far as the eye can see.
Yes, we were the Canary Islands! And we actually won a prize!
(Though on closure inspection I can see some sadness in my eyes.)
The year? About 1962; great sorrow lay ahead.
In fact I find I much prefer my present old age instead!
*
Posted by Rinkly Rimes at 6:18 PM

A touching tale told brilliantly in such well written poetry.

P.S I just wanted to say that I live just down the road from Brewood.

I think it's great that you changed crawl to craw. I almost changed it myself in the wordle, as craw is so rich....alas, they were Kerouac's words, not mine. But hey, it's yours.
Femolution--- GO GIRLS! I love it.

As for your second piece...I was born in '62. Thanks for taking us on a trip to visit younger you. I'm certainly glad life is better for you now. Mine got better after 40. That was nine years ago for me.

You wore your sadness beautifully back then...better though, that it's been replaced.

FEMOLUTION!
Loved your title. This is a great line: "Women are no longer just birdlike and quivering. Cowed by glances from the males, abject, pale and shivering. They are Bodacious!" Bodacious is such a cool word!

Hummm, I'm thinking I'll be better off if you don't read mine. I'm afraid you will come over and femolgate me.

I loved "Femolution." Made me laugh. Glad there aren't that many 'quivering' and 'birdlike' women anymore. LOL.

A wonderful pair of poems and pictures, although I wouldn't want the bra that first Valkyrie type is wearing. ;)

Boadicea - someone else for me to Google. :) Seems she was a warrior queen. Maybe that's where "bodacious" came from...

Love the word Femolution!! Love the whole tone of the poem.