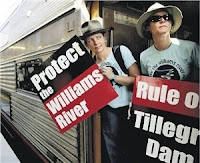 PROTESTATIONS!
Red is a rousing colour that Protestors often use!
When it comes to placards it's it's always in the news.
Here are two young ladies setting off to join a rally
Intended to stop a project, the damming of their valley!
Maybe a dam is needed and maybe it is not;
A water-supply is needed when the weather's dry and hot,
But pristine countryside is doomed; there are many broken hearts,
And many different opinions register in the charts.
These young ladies have a viewpoint and a valid one, I'm sure.
They have the right to speak their minds. Long may it endure!
*
Later
I can report they had success! They, and every other supporter,
Prevented the building of the dam, the flooding of farms with water!
I still don't know the rights and wrongs, the politics of it all,
But it's good to know, in democracy, the voice that's  heard though small.
*
----------------------------------------------------------- 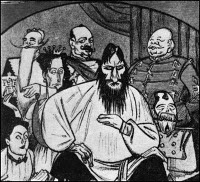 Would I have fallen underneath his spell
As many did in Russia long ago?
His was a tale that folk would tell and tell.
His was a name that everyone would know.
Of his first forty years there's little known;
Except that from rough peasant stock he came.
He married, so he did not live alone;
And yet to monkish powers he made a claim.
He seemed to have the power to heal the sick,
And people flocked to listen to him speak.
But was this just a very clever trick
He used to fool the gullible and weak?
He heard the Tsar's son lingered near to death
Hemophilia was this poor boy's affliction.
Rasputin somehow stayed his final breath!
The drama was as great as any fiction.
Because of this strange act the people thought
He must be holy, free from any taint,
And all the high and mighty in the court
Began to view Rasputin as a saint!
He had a way with ladies, so it's said;
Although he never learned to read and write.
And many found their way into his bed,
Meaning his soul was not exactly white!
His influence began to grow too great;
In politics he often took a hand.
He acted as adviser to the state
His 'wisdom', more and more, was in demand.
Three noblemen decided he must go!
They planned his death discretely as they could.
The Tsar, of course, was not allowed to know;
He thought Rasputin wonderfully good.
His death has puzzled everyone for years!
With poisoned cake and wine he first was fed!
Imagine all their terror and their fears!
The victim didn't writhe or fall down dead!
So then they shot him, but he still survived!
So they pushed him in the river, under ice!
Was ever there a murder more contrived?
But at least Rasputin now had paid the price.
What he was, for certain, we're not sure.
A healer who was just misunderstood,
A holy man who had the power to cure,
Or a villain, quite the opposite of good?
But I wish that I had met him face to face;
Would he have had an influence over me?
I like to think I'd have put him in his place!
Then I'd have earned a place in history!
*
Posted by Rinkly Rimes at 7:31 AM

I agree. It's good to know that protests can work. Nice poem.

I'm always appreciative of people who will let their voices be heard, whether it's in Australia or the Middle East!

RED FOR A RUSH

O what would we do without red?
“I just can’t imagine,” she said.
“Vermilion and pink
Are colors, I think,
That make the blood rush to my head.”

It's a terrific candid shot! I'm glad they were successful!