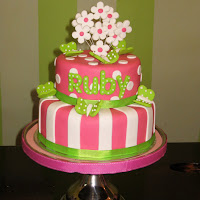 PINK SATURDAY
http://howsweetthesound.typepad.com/
We are asked to combine pink with green this week.

CONTRARY
Ruby was a lady who was terribly contrary;
She might have been much easier if she'd been christened Mary.
As a child her favourite word was a very definite 'No!'
If anybody bade her 'come' she'd quickly up and 'go'!
She'd scream and pout and carry-on with a great ear-splitting roar,
And arch her back and throw herself in a paroxism on the floor.
As she grew older she grew more contrary and not less,
She was the epitome of utter contrariness.
Her hair was a loud ginger; she was often nick-named 'Red',
But she always wore bright scarlet clothes, not something quiet instead.
She threw a birthday party when she was thirty-three,
Saying 'The cake will be one suitable for me.'
You can see the cake above; the icing's green and pink.
Do you find Ruby contrary?
Tell me what you think.
*
----------------------------------------------------------------- 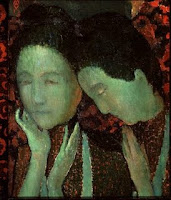 TWO SISTERS!
What lies behind their enigmatic faces?
What tragedies have claimed their waxen cheeks?
The eyes are hooded and I see the traces
Of words unspoken where no warm mouth speaks.
The artist gives no clue to their importance;
An air of mystery pervades the scene.
And odd it is that for their skin he's chosen
A hue of pale and almost sickly green!
I must call-up a tale to fill the spaces.
I must imagine what I cannot know.
For sure no happiness is here depicted.
The painting speaks of grey and grinding woe.
So where, I wonder can we make a starting?
Where can we find a point where truth begins?
Their closeness? Yes! Felicity and Honour!
Two middle-aged and most devoted twins.
They've given-up their lives to nurse their father;
Now he has died; they're seated by his bed.
Imprisoned by obedience for the decades
Now they are rudderless since he is dead.
The women mourn for Father (it's their duty)
And they fear the future now that he is gone,
And yet, I see a light behind the eyelids!
Which one will first say
'Sister! Life goes on!' ?
*
Posted by Rinkly Rimes at 1:47 PM

Such Great words! Very touching. Be a part of Finer Friday. (finerfriday.blogspot.com) and become a member by contacting. It is a place where writers use their skills to write on a theme, provided every Friday.

I don't know if Ruby was contrary but I sure like her cake! Happy Pink Saturday!

I think Ruby became less fiery red and toned down to a mild form of red...she became sweet pink!