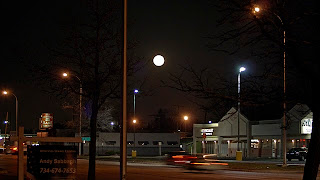 HANDMAIDENS
Oh Moon! Thou shinest round and bright
Central to the velvet night.
And we, thy handmaidens, draw nigh,
Worshipping thee, Queen of the sky.
We are poor things that feebly glow,
Standing on stalks, transfixed, below!
Thy silver orb is oh so great,
We cannot hope to emulate
Thy fearsome whiteness shining down
On this, our shabby little town.
We turn our faces up to you
Trying to learn what we should do.
But we are in the power of men,
Switched on and then switched off again!
Oh Moon! Oh goddess! Cast thine eye
Upon thy handmaidens who.........try!
*
------------------------------------------------------ 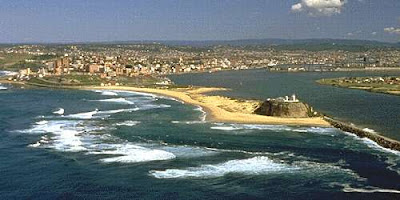 UNDER DISCUSSION
Newcastle, is a city that isn't widely known,
And yet it has attractions that belong to it alone.
Take Nobbys, once an island, till an artificial beach
Was built to keep the wild waves within reasonable reach.
This was in the days of sail, when many ships went down
Traversing the heavy surf as they attempted to reach town.
Now Nobbys is under discussion......should restaurants be built,
Leaving the historians with quite a sense of guilt?
Or should it remain a relic of the days of long ago,
Something that developers call backward-looking, slow?
Watch this space for a year or two then, maybe, you will see
What the outcome of this brouhaha will be eventually.
*
Posted by Rinkly Rimes at 12:47 PM

I really like your analogy of little lights as hand maidens to the Queen Moon!

Handmaidens has such a unique perspective. Well done!

I do like Handmaidens - it made me smile!
I'll watch with interest to see what happens to Nobby's.
Meanwhile, enjoy your cruise:-)

I love the lamenting contrast between the moon and the lights - very creative!

You are my most consistent Monday Morning Photo Prompt participant.