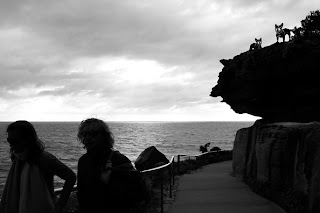 The letter sat before him unopened and unknown,
Pristine, propped up against a mug.
Toying with his slice of toast, luckily alone,
He felt the letter looked a little smug.
It had arrived the day before; he'd eyed it with concern.
The address was typed; it didn't tell a thing.
Was the split for ever? Or could he soon return?
He felt the envelope. Ah! That was good! No ring!
The boarding-house repelled him, with its awful clientel;
He didn't think that he could take much more.
Would she have him back again? It was so hard to tell.
He dreaded what the future had in store.
His children wouldn't miss him! The dog just wouldn't care!
If she wouldn't have him back where could he go?
It was her fault as well as his! So! Life just isn't fair!
She hadn't got the right to tell him 'No'.
But if she told him 'Yes' that would be a great relief!
Life could go on as though he had never left!
His sojourn in the boarding-house might just prove to be brief!
He wouldn't have to feel so damned bereft!
He'd open it! The slice of toast lay cooling on the plate.
It had to be, it had to be, it had to be from her!
With shaking hands he tore the flap! He had to learn his fate!
Then he read the lawyer's formal words..........
'Dear Sir'.

Labels: Weekend in Black and White

Publicity ;o) Every Friday (and the Weekend), The Challenge "Walk In The Street Photography"