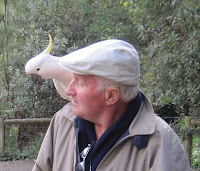 Although England is a small island there are tremendous differences in local accents. When I moved, as a child, from Kent to Staffordshire, my accent was considered very weird! (And vice versa!)
THE WEIRD WORDS!
* 'Cost kick a boh agin a woh, yed it and bost it?'
*

Can you read the words I've written up above?

It's a simple little phrase, you must agree.

But as someone from the South,

With a fat plum in her mouth,
The dialect was foreign as a phrase can be.
*

My father took a job in Staffordshire

So we all moved holus-bolus up from Kent.

And there, just as we feared,

Our accent was thought weird,

And we were laughed at everywhere we went.

I longed to speak the same as all my friends.

(Yes, peer-pressure was around in days gone by.)

With an dialect not my Mother's,

I gladly gave the phrase a little try.

I practised till it rolled right off my tongue,

As though I'd been a Midlander since birth,

Though, sometimes, my attempt

Was treated with contempt

And my school-mates couldn't quite contain their mirth.

My mother was appalled that I should try

To lose the accent that was mine by rights.

A voice that wasn't 'naise'

And I'm sure she suffered many sleepless nights!

Now I listen gladly to the BBC,

And hear accents that have come from far and wide.

Voices don't have to be tamed,

They are welcomed and acclaimed.

And a dialect is now a source of pride.

*TRANSLATION!
Can you kick a ball against a wall, head it and burst it?'
Posted by Rinkly Rimes at 12:37 PM