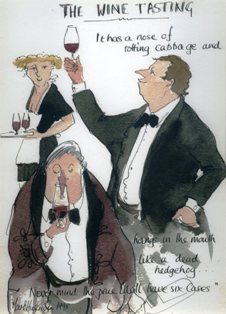 WINE WORDS!
I haven't got a nose for wine, in fact, I rarely drink it;
I just imbibe at functions, when I take a glass and clink it.
But I yearn to be a vintner, with grapes upon the vine;
I'd love to create a vintage that was mine, entirely mine.
And what will I call my vintage? It must be quite unique,
With that quinessential chache that all wine-tasters seek.
I think I'll call it 'Tickle Taste'; that should set tongues wagging;
It doesn't sound pretentious; there is no hint of bragging.
And yet it shouts out 'Different!', a good old marketing ploy.
'Wine for the Connoisseur' I'll say 'Drink up and enjoy!'
Then wine-tasters will sip it, and smell it and swill it round,
And very soon pontificate in phrases most profound.'
'It lingers on the tongue', they'll say 'Like a distillation of Spring;
I can smell a country breeze and hear the skylarks sing.'
Or may be 'It's so mellow, it has a honey glow;
The taste's as rich as molten gold blended with pure snow!'
Some may use a hackneyed phrase such as 'Delightfully mature',
'Redolent of the cask itself' or ' Pristine, pale and pure.'
Some may sense some 'Strawberry' or even a touch of 'Smoke',
And nobody will dare suggest that the whole thing is a joke!
I speak as an ignoramus, but, as far as I'm concerned,
One either likes a drink or not; so what needs to be learned?
My palate is my palate; I'm in favour or I'm not;
I'll say 'Goody goody' if it happens to hit the spot.
People must be brave enough to make their minds up for themselves.
*
Watch out for a bottle of 'Tickle Taste'; it should soon hit the shelves!
* 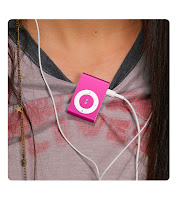 I don't possess an iPod;
I don't really desire one.
So I'm not in the market
To purchase or to hire one.
Melodies by the hundred
Can be heard at any minute,
Two hundred and forty items
They tell me it has in it!
But I recall the old days
Listening to the radio,
When sudden recognition
Brought a bright all-over glow!
I'd be standing at the sink
And the radio would be playing
And, suddenly, I'd be alert
As I heard the announcer saying
That 'my favourite tune' was next in line!
I'd stand there like a stone
As the music from some dance-band
Played for me alone.
And at the end I'd sort of sigh!
It had been quite sublime.
But now I knew I'd have to wait
Till it came around next time.
I'd hum the melody in my head
To hold-on to the pleasure.
So each particular hit-song
Became a special treasure.
But now, a finger-jab away,
Is quick gratification!
No waiting, yearning, hoping;
No desirous contemplation.
Quickly come, and quickly go,
Short-byte! One two three!
But where's that old-time magic?
The iPod's not for me!
*
Posted by Rinkly Rimes at 4:17 PM