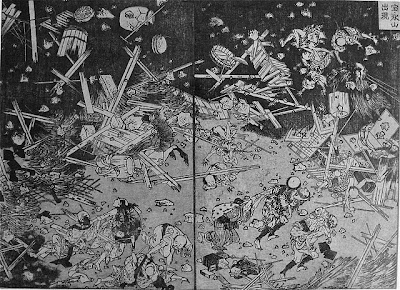 Hokusai?
WATERY WEDNESDAY
A HOPEFUL SIGN
(My friend Margaret Gosden recently displayed this ancient artwork on her blog and I found it quite inspiring.
http://margaretgosden2.blogspot.com/
This scene from the eighteenth century, a very far-distant date,
Shows a terrible Tsunami, in Japan and in full spate.
The scene of destruction is familiar, the devastation the same;
The terrified people fleeing from a power they cannot tame.
It's happened before, that is certain, in days when the news was rare,
And other nations were ignorant of crises 'over there'.
Now the news is immediate, we see scenes in our living-room
That make us believe it's 'the end of days' and we're heading to our doom.
Way, way back in history the people of the West
Knew nothing at all about Japan, China and all the rest.
And they knew nothing at all of us; history was missed;
Even The Great Fire of London, to them, did not exist.
*
So why do I use the word 'hopeful'?
The poor suffering Japanese
Are a people who can recover from calamities such as these.
In the decades following the scene above they laboured, hour by hour,
To build themselves up as a nation of achievement and mighty power.
They've a long and arduous road ahead, years of pain and woe,
But now the world is smaller and other people know.
Helpers from forty-five countries are there to give a hand,
In a way the people of the past would never understand.
The nations have come together and that is really fine.
*
That is why I call the scene above
A Hopeful Sign.
*
---------------------------------------------------------------- 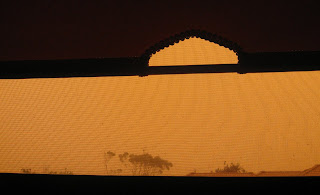 DUST STORM!
Nature toying with us in 2009.
In the olden days when I was young
And tunes with pretty words were sung,
Love would come, oh me oh my,
'Out of an orange-coloured sky'!
And sunsets with an orange hue
Encouraged lovers to bill and coo.
So the colour orange was much admired
For the passions it inspired.
But dust storms, straight from Australia's heart,
Can't be compared with works of art.
They choke the air, they dim the eyes,
They slow the cars, they paralyze.
Their residue is orange dust
The colour of some ancient rust.
They leave behind their own perfume:
'Eau de Musty' in each room.
Nature doesn't even care!
It doesn't even know we're there!
*
Posted by Rinkly Rimes at 10:33 AM