Does it really matter that it's gone?
After all, you know, we must keep moving on.
Everything that starts must cease to be;
That, of all things, is a certainty.
This was our R.S.L*. for many years.
It started after Blood and Sweat and Tears;
After the First World War when men returned,
Hopelessly shattered, scarred or maybe burned.
The RSL was the club where men could meet
And talk about the days of battles' heat.
Those who survived with, maybe, not a scar,
Could meet to have a chin-wag or a 'jar'.
In time it was a public place to be;
Part of our local small community.
It wasn't all that smart towards the end,
But it was a friendly place to meet a friend,
To just relax or have a bite to eat;
Or just say 'Hi' to friends from down the street.
Last time, I glanced up at the youthful Queen,
Who's gazed down so benignly at the scene,
And said 'Goodbye old Girl! It's time to go.
They're going to pull it down. You'll be laid low.'
The wreckers will arrive and you can bet
That everyone will say
'Lest We Forget.'
*
*Returned Servicemen's League. 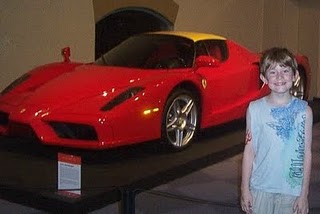 
Blake fancied a Ferrari when he was six years old,
And not the sort of Dinkie car a little boy can hold!
He knew he couldn't have one for at least a year or two,
So standing by a bright red one would simply have to do.
When we went to the museum, there was the very one,
Shining with the redness of a brightly setting sun.
I took a photo of him since photos were allowed.
I know he didn't own it but, my goodness, he looked proud!
*
Posted by Rinkly Rimes at 6:45 PM