PREDOMINANTLY PICTURES!﻿
I'm not entirely certain
But I'm pretty sure it's true
That graphic fiction aims
To make life easier for you.
Should Tolstoy prove too taxing,
Should Shakespeare numb your brain,
You can read the tale in picture-form
And thus escape the pain.
Now a comic is a comic;
That I can quite accept,
But why should a novel be 'comicised'
Just because you're inept?
(The 'you' I refer to isn't you ........
I'm sure you're literate!
I'm sure you'd never take 'King Lear'
And try to 'Twitter' it!)
Great writing is much more than plots;
The language is paramount,
And Graphic Fiction, it seems to me,
Says language doesn't count.
I think it must be very rare
For someone to start with pictures
And then turn to the literature
With its academic strictures!
If we asked 'Will you now read it?'
They'd respond  'No I will NOT!
Why should I plough through all that stuff
When I already know the plot?'
So it's a case of 'either/or'
And, though my understanding's hazy,
I feel that Graphic Fiction's
Just a way of being lazy.
*
------------------------------------------------------------------
PS
Today we had a rehearsal at the hall. (It rained......of course!) We're getting toward crunch time so we'll have to slip-in extra rehearsals. But today was pretty useful as we organised a few moves and routines. I was so touched and delighted when 'the girls' (!) gave me a bunch of flowers for my birthday, which was on the 1st. Luckily I had my camera handy! 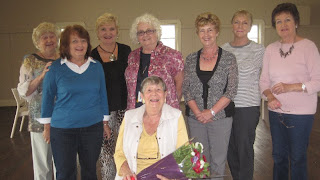 Note how we're all rugged-up! And it's Summer!
Posted by Rinkly Rimes at 7:15 PM

A sin? Really? It seems so teensy. And I couldn't help myself!

You have captured temptation to a T!

"That which is denied attracts!"

how does one not push those buttons?

Peter Griffin is right lollll. Loved the picture - it's adorable. Missed coming by. Stop by and say hi... Hugs, Sue

I would definitely have to push that button!

I would never push that button. Either of my brothers might, but I'd be afraid it would stop an elevator, or turn on ceiling sprinklers, or set off a loud alarm that would shriek, "Kay did it, Kay did it" (in my sister's voice).
Congratulations — both for your birthday and for coming up with the quintessential temptation poem.
K

That which is denied attracts.

I would push that button ~

Fireblossom tempted me to write on temptation so I gave in. lol Love your poem...nice work!