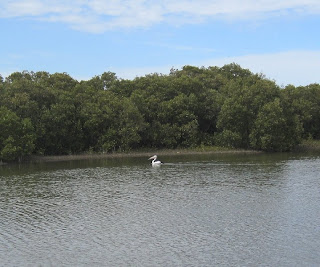 
Once there was a wealthy Sheik who was very seriously ill.
He went to a famous doctor who was well-known for his skill.
Said the Doctor 'I can operate, but your blood type is so rare!
And, without blood for transfusing, I really wouldn't dare
Attempt an operation. I'll try to find a donor,
Even if I have to go as far as Barcelona.'
A world-wide search brought up the name of a Scotsman, name of Mack,
Who was very short of money and living in a shack.
The Scotsman gladly gave his blood and the Sheik was so impressed
That he showered Mack with presents from his bottomless treasure-chest.
Along with fifty-thousand dollars, he gave him stocks and shares,
All of which caused an improvement in poor old Mack's affairs.
Sad to say, the operation was not a complete success,
Which caused both Sheik and Surgeon a great deal of distress.
'I must simply operate again' the Doctor said at last.
I'll contact Mack; we'll use his blood as we've done in the past.'
The operation was successful and a gift duly arrived
From the ever-grateful Sheik who was delighted he'd survived.
It was a box of chocolates! Mack felt rather vexed.
He had hoped for money! He was thoroughly perplexed.
He wrote to the Sheik....'Excuse me; I don't want to complain
But I expected more from you when I gave blood again.'
The Sheik replied 'I'm sorry but this was  all I could allow.
You must understand that I have Scots blood flowing in me now'.
*
----------------------------------------------------------------------
PS

We performed 'Tiddly Pom' for the umpteenth time yesterday. This time it was at Valentine, the lakeside suburb where Malcolm and I first lived when we came to Australia. The venue was great and the audience was most responsive, giving us our first standing-ovation at the end! 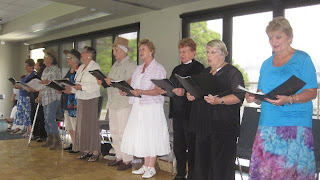 Here we are singing the opening number. 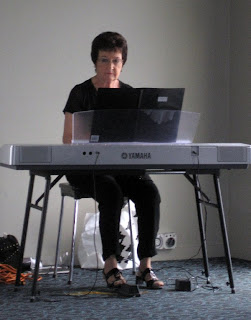 This is a shot of Carole, our pianist, who rarely gets on the Blog. 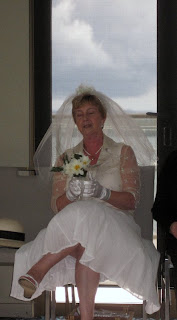 And here is Joy preparing for the riotous wedding at the end. Note the clouds outside the window!
Yes! Surprise! Surprise! It rained!
Posted by Rinkly Rimes at 2:32 AM