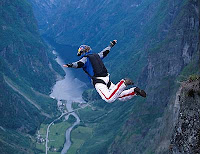 ECCENTRIC ENDEAVOUR!
Someone has to be the first in any new endeavour.
Some may be simply foolish, and some just very clever.
Someone had to take the risk and be the first to try
Throwing themselves from a pinnacle into an empty sky!
*
Base-jumping is a hobby I would never have embraced.
"What! Jump off that there pinnacle! Certainly not my taste!
Free fall and then just parachute? Are you out of your mind!
To be the first to try it it, I'm simply not inclined!"
*
Then take the egg, a curious thing, looking like a rock,
Someone had to taste one first and risk an awful shock.
It might have tasted terrible! The taster might have died!
But, somewhere, there was someone who stepped right up and tried.
*
If I'd been prehistoric I never would have dared;
Friends could have called me cowardly but I would not have cared!
"What! Eat that thing! It looks so hard and it's full of jelly stuff!
I'm hungry, yes, but look at it! I'm just not brave enough!"
*
Many of life's pleasures have been found by those who've 'tried';
But some have been disasters and the trying-types have died!
I'll simply wait here patiently while others do their worst.
I'm a follower, not a leader!
I wont try anything first!
*

Thank you for the warm 'homely' thoughts.!!!

True, it takes a lot of guts, to be the first in anything Thought provoking.

I love your take on HOME. You are so clever~

I enjoyed your lyrical poem...yes, I am more a follower, but have lead.
It is scary to be first~ Well Done