FAST WORK!
Madge was driving much too fast and a policeman flagged her down,
Sternly fixing her with his eye and a terribly  harrowing frown.
'Is this your car' the policeman said. 'Well, no' Madge then replied;
'I saw it parked outside a house and took it for a ride!'
'Indeed!' said the Officer ' Fancy that! What's that parcel on the seat?
Madge began to cry! It was very clear she was starting to feel the heat.
'I confess! I confess!' she wept and wailed ' Those are human remains!
I'm afraid I killed my mother-in-law! In there you'll find her brains!'
The Policeman phoned the station....... 'Assistance needed here!
I've apprehended a criminal; a vicious one, it's clear!'
Reinforcements then roared up and Madge was interrogated.
The Officer in Charge soon found that her driving licence stated
That she was the owner of the car! She saw the Policeman wince!
As for the package it was found to be some sausages and mince!
'What the hell are you playing at?' cried the Officer in Charge, bright red,
Accusing the first Policeman of not being right in the head!
And Madge chimed in 'Don't trust him! The next thing that he'll do
Is try to try to tell another lie and say I was speeding too!'
* 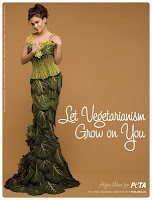 TURN OVER A NEW LEAF!


Vegetarians! State your case!
Greenery to the fore!
Here's a dress made up of leaves
Sweeping to the floor.
They look like cabbage leaves to me,
Wonderfully uniform,
And clinging very charmingly
To a most curvaceous form.
So if you're turning over leaves
(And some are good to eat)
Become a vegetarian
And give up eating meat!
*
On the other hand, if you like a steak
Stick to one, for goodness sake!
*
Posted by Rinkly Rimes at 7:32 AM