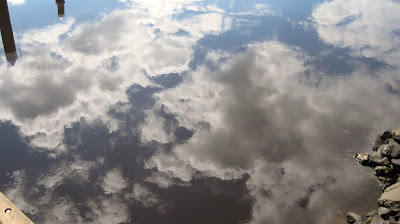 
Chicken-Licken yelled 'The sky!
It's fallen in and we must fly!
I heard it from a little frog
Who'd read it on somebody's blog!
He went to check and found it true!
The lake was certainly sky-blue!
Yes, it was water, cool and wet
But he hasn't solved the mystery yet.
There were clouds that should be floating,
Dunking where there's often boating!
There was the sun, still shining brightly,
But not where suns should shine, not rightly.
I was afraid to raise my head
To look at what lay overhead!
Maybe I'd find the sea up there,
Splashing about up in the air!
Save me!' Chicken-Licken sobbed
'For I fear that I've been robbed!
Robbed of the sky that I'm so used to;
The sky that I was introduced to
So long ago, at Mother's claw.
The sky, in those days, that I saw
Was always, always up above!
Now that was a sky a chick could love!
No wonder I shiver and I shake!
The sky has fallen in the lake!' 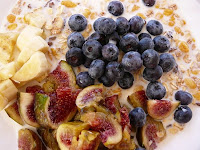 THE MUESLI MURDERS
by
Brenda Bryant

(Written in response to a request for the title of an unwritten novel!)

My unwritten novel would have the theme of chicanery, murder and vice.
(I've never written a novel; just considered it, once or twice.)
There'd be a devilishly clever killer and a lot of sin and sex
And the plot would be designed, of course, to puzzle and perplex.
Why 'muesli' in the title? Well, has it been done before?
And I love alliteration as much as blood and gore!
Also, muesli would be a vehicle for the murderous intent.
A jumble of bits and pieces would be almost heaven-sent.
If muesli were part of the killing, I'd hide a poisoned berry
In among all the goodies! Now that is clever! Very!
But if muesli were part of the cover-up, just consider with what ease
One could box bits of body in muesli! Golly Moses! What a wheeze!
The cutting-up might take ages, but who would ever guess
That harmless boxes of muesli would hide such wickedness?
The killer could take the boxes, one at a time, no doubt,
And hide them in supermarkets! No-one would ever find out!
(Except, maybe the purchasers! I hadn't thought of that.
Maybe they'd turn up their noses and feed it to the cat!)
Don't ask me about victims; I really haven't a clue.
Don't ask me why they are as they are, or do the things they do.
I've never written a novel. Maybe this is the reason why;
I'm no good at fleshing-out people; only the way they die.
*