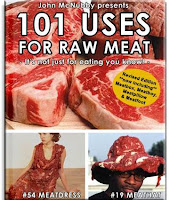 ZOMOTHERAPY
Have you got a blood disorder?
Is your patience wearing thin?
Are you searching for a cure-all
That will ease the state you're in?
Raw-meat therapy might help you!
Zomotherapy to the fore!
Some raw-meat soup might be the answer!
Can't do you much harm, for sure!
Here's the recipe to help you.....
Take half a pound of minced raw meat,
Mix with milk to make a paste.
(Alright! Alright! I can hear you!
'This isn't really to my taste!')
If you wish, add some tomatoes;
Even risk a little cream!
Open up and toss it downwards!
It may work just like a dream!
Zomotherapy is the treatment
Often mooted for T.B.
I got all this stuff from Google;
If you're 'put off' don't blame me!
*
PS. This is a serious treatment suggested by specialists! Forgive my levity!
BB
----------------------------------------------------------

ROAD RAGE
Sonny, driving rather fast, down a country lane,
Sees a car approaching; treats it with disdain.
Doesn't dream of pulling over, though there's not much space;
For drivers such as Sonny driving is a race.
Nita, who's the other driver, winds her window down;
As she's passing yells a greeting, accompanied by a frown.
'Pig!' she shouts out very loudly! (Well, I'd shout it too;
When you meet a lousy driver what else can you do?)
He responds with some expletives, one of which is 'Bitch!'
Then, round the corner, he meets the Pig
And ends up in the ditch!
*
-----------------------------------------------------------
PS
A minor irritation occured the other day. I was due to give friends a lift to The Cricketers' Arms in my car, but when I tried to start it the battery was flat. Someone came to my aid, of course, but I spent a considerable time pacing up and down outside my house in the interim. When I next saw Malcolm I said 'We need a seat of some sort out the front.' And lo! When I came home yesterday, there it was!﻿ 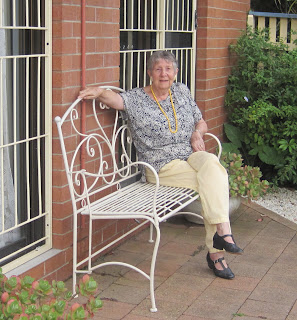 Incidentally, while trying to get an artistic view of it through the foliage, I photographed this piece of greenery by accident! Enlarge it to see how gorgeous it is! I might give-up poetry and go in for botanical photography! 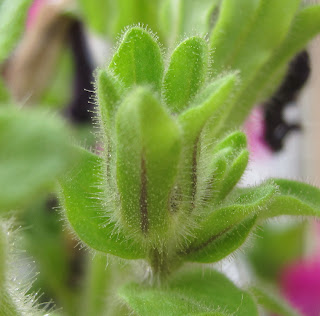