Of Its Former Self

THEN
OF ITS FORMER SELF
This time last year my garden (a tiny little plot)
Was overgrown and rampant, the fence about to rot.
The jasmine was all woody, the bird-bath past its best;
All was cool and shady, but nothing much impressed.
So the whole thing was 'bull-dozered', well, in a sort of way,
And everything is neat and spare in my courtyard today.
Oh yes, it's all much easier; the pebbles ban the weeds;
No soil remains for little birds to drop their naughty seeds.
The fence that Malcolm's fashioned is quite a work of art;
He's even sort of 'sculptured' it, so he has played his part.
It's an ideal garden for the elderly, with nothing much to do,
So we can just relax out there, enjoying our new view.
But I'll always sentimentalise over my by-gone bower,
With its general air of discrete decay and every wayward flower.
'A shadow of it former self'? No, I'm really very glad
That we no longer have the mess that, previously, we had.
But I'll always sigh a secret sigh for the garden that has gone,
While knowing that change must always come, and we must travel on.
* 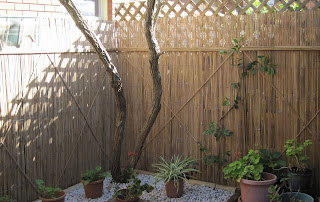 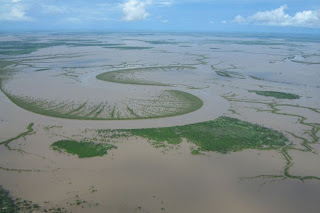 Australia, having come through the World Financial Crisis with flying colours, is reeling at the moment. An enormous area is flooded...... larger than Texas, as large as France and Germany combined...... in what is being called a Slow Tsunami. The water will not reach some places for weeks, maybe months, but it is inexorable. Added to that, because it is still drenching down rain, some places have had flash floods as well. The town of Twoowoomba had a great wall of water roll through it, and, at the time of writing, 66 people are missing. The mining industry has had to close down, all the crops are ruined, the road and rail links are crushed almost beyond repair. Billions of dollars will be lost. There will be shortages of food, and elevated prices down the track.
The last Great Flood was in 1974 and thereby hangs a personal tale. We travelled from S Africa to Australia that year, and we were on a ship carrying immigrants from Italy. A film of Twoowoomba was shown on board and I fell in love with the place. It is in the hills in the hinterland of the Gold Coast and it looked lovely. However, when we landed we discovered we couldn't get there because of terrible floods, so we stayed in Newcastle until things improved. We found we liked Newcastle after a while and decided to stay. It is where we now live. And we are safe from this new flood here. It is strange how things turn out sometimes. 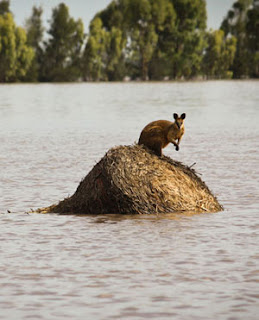 Hi Brenda. I like your new garden. Very Zen. However, I WILL be stealing your idea of putting potted flowers in MY bird bath. The birdies never use it, so . . .

I think of Australia and the floods regularly. I have prayers for your countrymen on my sidebar. Every thought is a prayer, Brenda.

your accounting of the floods is heartbreaking. I hope that kangaroo was rescued. so much devastation, but I'm also hearing of the boundless, irrepressible spirit of the Australian people. It is strange how you were guided to a different spot from your original plan and now have escaped the flooding. on a brighter note, your new garden is lovely; so too are your shadow shots.

Lovely captures, shadows as always, Brenda. The flooding is so devastating and it is indeed a shocking flood crisis! Holding good thoughts for your countrymen!

The flood is just unimaginable. Australia remains in our prayers.

Your new garden area looks very neat. We use lots of rocks in yards here in the SouthWest. They call it Xeriscape with desert plants and low water use. Happy SSS to you.

Lovely shot of your garden, it looks so easy to maintain.

Slow Tsunami indeed. But I know the Aussies have courage, stamina and will conquer!!!

Love your poetry too. You're so very talented.


Selena Statue on the Bay

Hope your day is a happy one.

The garden has vanished, they say,
The flowers and fruits gone away;
But something lives on
Of what is now gone—
What’s that I smell, friend? A bouquet?

Your photos are excellent. And you’re an inspired poet – not that I’m worthy to judge.
Our thoughts are with the victims of the flooding too.