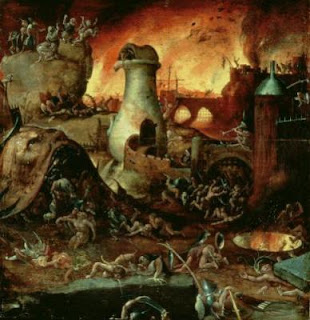 Poor old Hieronymus needed to see a shrink
To analyse the curious thoughts it seemed he used to think!
Hell was constantly on his mind! He dreamed of gore and pain,
Painting people in agony again and again and again!
They'd always made the descent to Hell and were paying the dreadful price
Of leading a life of perfidy and every sin and vice.
Once there they thought of ghastly ways to kill the other sinners,
Eating others' body parts for very gruesome dinners!
His worlds were totally surreal and horrible beside!
Nakedness was paramount and quite undignified!
Buttocks featured frequently and gaping mouths dripped blood,
As awful creatures writhed about in slithery slime and mud!
His was a world of nightmares in which many men believed.
*
(When the Church deleted Hell I was much relieved!)
*
--------------------------------------------------------------------------------- 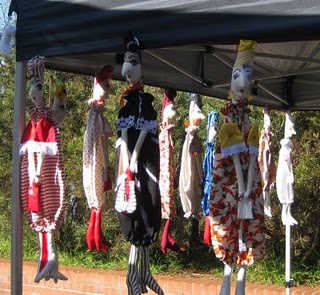 Have you been on a diet, too, darling?
You're looking delightfully slim!
Yes, I, too, was saggy
And quite a bit baggy,
But now I'm all slender and trim!
*
When I looked in the mirror, my darling,
I loathed my reflection therein.
I was all roly-poly!
Not slim like La Jolie!
I didn't know where to begin!
*
But I went on this diet, my darling;
It's one that I must recommend!
On Sunday a muffin
And, after that, nuffin'!
It worked very well in the end.
*
So now I'm a picture of slimness!
Just look how I sway in the breeze!
My tummy is flatter
Than when I was fatter.
The only things plump are my knees!
*
But the slit in my back does concern me!
They say it's for putting things in!
For we're all laundry bags!
So they'll stuff us with rags!
That's what happens to girls who are thin!
*
Posted by Rinkly Rimes at 2:26 AM

A very good 'dig' at Mr. H. Bosch.
Not one of my favourite painters, he did a very good propaganda job on behalf of the authority of clerical dogma.
I loved your 'punch line' at the end.

Sheilagh Lee said: "when the church deleted Hell I was much relieved."LOL so deliciously good.

They can delete Hell, but they can't delete all the previous years of indoctrination. I can still vividly recall childhood religious classes showing stick figures dancing in flames. Hieronymus has my sympathy.

humorous hell... i thought myself rather strange laughing all the way... but now i see it's all in jest.. skinny isn't all there is to life.. right??? thank you for such an entertaining post...