Deadlier Than the Male! 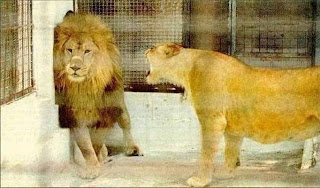 MELLOW YELLOW MONDAY
DEADLIER THAN THE MALE!
Great, noble, yellow beast;
Predator most feared,
With your gleaming golden eyes
And your straggling beard;
With your teeth as sharp as nails
And your claws to match;
Always on the look-out
For another prey to catch.
With your roar that chills the blood,
And makes us run and hide......
What's this anomaly that I see?
You're  hen-pecked by your bride!
'Did you put the garbage out?'
'Why were you home so late?'
'You always forget my birthday!'
'Call yourself a mate!'
You're even trying to run away!
Your muzzle looks quite pale!
It must be true that the female
Is deadlier than the male!
*
----------------------------------------------------

INJUSTICE!
(A True Story)
The greatest injustice of my life occurred when I was five!
And it's lingered in my mind for all these years!
It was such a little injustice but I know that, at the time,
I ended up in floods of scalding tears.
We were sitting in a circle on our little wooden chairs,
And the knitting-lesson was about to start,
When the teacher opened-up a tin of toffees on her lap;
And I felt a jump of pleasure round my heart!
'Toffees at school!' Unthinkable! I couldn't believe my eyes!
For teachers were so severe in days gone by.
My mouth began to water at the thought of this excess!
And my expectations were so very high.
'We're going to learn to knit' the teacher said as we sat there.
' But children are taught to knit well before school.
Put your hand up if your mother has taught you how to knit.
It's a task we learn in our own homes as a rule.'
Every other hand was raised, but my Mum had been remiss!
She hadn't taught me how to plain and purl!
Everybody looked so happy to be putting up a hand.....
Everybody but one shame-faced little girl!
'Excellent!' the teacher said; 'There's a toffee for you all!
Your Mothers have behaved as Mothers should.
Except for you, Brenda Gillbert! I really am quite shocked!
You don't know how to knit and that's not good!'
So they all chomped on their toffees as I just sat and scowled,
With the bitter tears just dripping off my chin.
I felt an utter outcast, and a positive disgrace;
It seemed that I'd committed quite a sin.
But, as they all chomped round me, licking their silly lips,
And giving me a supercilious stare,
I suddenly grew quite stroppy and I rudely blurted out
'It isn't my fault! You're not being fair!
It's not my fault that I can't knit! My mother is to blame!
I really ought to have a toffee too!'
'Go to the Headmaster!' the irate teacher said;
'He's the one to deal with the likes of you!'
I didn't get a caning; after all, I was only five;
But I got a telling-off for being rude,
And never, in my eighty years, have I felt injustice so
And I never forgot that little interlude.
Fairness still means a lot to me; I like to think I'm fair,
If I'm unfair it is usually unwitting.
But that little schooldays' episode had quite an effect on me!
I've done the barest minimum of knitting!
*
------------------------------------------------------------
PS
Two rather odd photos today, neither one being what it was supposed to be! 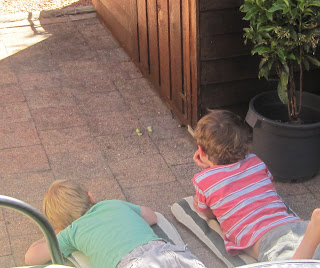 Here are Max and Harry waiting for Charlie our resident blue-tongued lizard to emerge from under the shed. Malcolm puts out bits of fruit for him and he usually comes out and eats them as soon as they're there. You can see the bits of grape but not Charlie! The loud whispers of two excited children made him cower back in his den. So we went inside and had a game of junior Scrabble and when we came out the grape pieces had gone. One very crafty lizard! 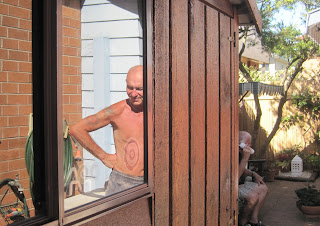 This shot is even more odd. It was intended to be a shot of the garden, but something went very wrong. Instead I got a shot of Mike's reflection. He was watching me with the camera. And there is Malcolm clearly making a phone call! The strangest thing is a target on Mike's torso! I presume it's something in the shed. I must investigate!
Posted by Rinkly Rimes at 3:01 AM

Probably better not to investigate, finding more
than you can tolerate in the woodshed in your 80th
year!

No rule of thumb for the lion, I guess. I've enjoyed your latest posts. You are wonderfully witty.

I love the lion poem and picture... he really does look henpecked!

DEADLIER THAN THE MALE: Looks in animal kingdom, that's the jungle or concrete rule..!!! :-))))

INJUSTICE: Justice had indeed faltered. Unfair to have not given a toffee to the kid whose a whiz with poem - her talent..!!!!

nice one! I am following your blog, visit and follow mine 2! tnx.
http://clavsupclose.blogspot.com