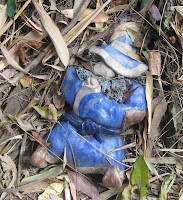 
LONG SNOOZE
She's often threatened to do it! My employer, the Witch, I mean!
How many times has she said it? 'You're the laziest man I've seen!'
But the work in the garden was arduous; I was often quite puffed out!
I needed a nap when I'd had my lunch! Of that there is no doubt.
But she came round with her jabbing broom, and jabbed me wide awake!!
'Wake up! You lazy so-and-so! Wake up! For goodness sake!'
This-afternoon I answered back! Not a wise thing to do!
'I'll sleep as long as I want to! A rest is overdue!'
With a really horrible cackle she snarled at me 'Very well!
If you want to sleep I shall let you sleep...... under my sleeping spell!'
Then she simply clicked her fingers and I was paralysed!
Lying as though I were fast asleep; sort of hypnotised!
'You'll sleep there for all eternity!' she cackled as she went!
Too late for me to apologise! Too late for me to repent!
So now you see me lying, feeling 'blue' and all alone.
I only wanted a little nap, but now I'm turned to stone!

STANDS TO REASON
Reuben was a bright young lad who attended Hebrew School;
He always got his answers right, for he was no-one's fool.
His teacher, Mr Goldblatt, had been lecturing the class
About the roots of Judaism and how things came to pass.
Reuben put his hand up and said 'I want to know
The answers to some questions, regarding long ago'
'Speak up' said Mr Goldblatt, 'I'll gladly put you straight
About our nation's history from the very earliest date.'
Said Reuben 'Well, sir, is it true, as true as it can be,
That the Children of Israel, when pursued, crossed over the Red Sea?'
'Indeed, it's true' Mr Goldblatt said; 'They followed all God's signs.'
Said Reuben 'And did the Children of Israel defeat the Philistines?'
'Indeed. indeed' Mr Goldblatt said 'Everything you say is true.'
Continued Reuben ' Is it right that they built the Temple too?'
'Yes' replied the teacher 'And they fought the Roman hoardes.
Our own Children of Israel fought against their mighty swords.
Now Reuben, what's the line of thought you're so keen on pursuing?'
'I want to know' said Reuben
'What all the grown-ups were doing.'
*
--------------------------------------------------------
PS
Australians, and Queenslanders in particular, are feeling very heartened at the moment. We have every reason to feel depressed, because even people like me, who run no risk of being flooded by rivers, will feel the effects of our dreadful floods for months to come. And the people who have lost everything, or who have seen their precious belongings reduced to wet garbage﻿, could be forgiven for feeling down. But several terrific things have developed from the ordeal. Anna Bligh, the Premier of Queensland, whose position was shaky not long ago, has been generally hailed as the hero (no sexism) of the floods. She took charge, delegated, encouraged and organised wonderfully, right from the start. She has appeared red-eyed from lack of sleep on our TV programs, but she has never faltered. 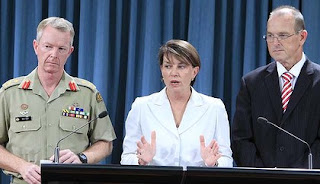 Consequently, everything is under control. And the Mayor of Brisbane has also been a role-model. He has just organised 11,000 volunteers to help clean-up the mess. We have seen them, ordinary people with brooms and wheel-barrows, marching off to duty. His practical idea was ...'We want two shifts; so toss a coin, heads for morning, tails for afternoon'; and this easy solution has worked well. This was our﻿ 'Katrina' and....... so far, so good.
*
Posted by Rinkly Rimes at 8:09 AM

Great find! I wonder how long he'd been sleeping.

Happy Blue Monday! Cute story about the long snooze. I feel sorry for all the people affected by these floods. It is wonderful that there are SO many volunteers to help. Some how I hope things can return to normal soon.

Wake him up, Brenda!

Love your poems and the second one about the children of Israel was so cute.