The Queen of the Bats 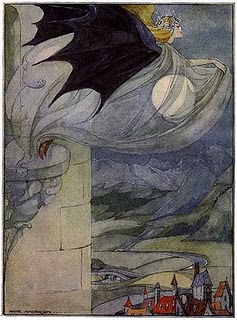 MONDAY'S CHILD
http://childrensverse.blogspot.com/
VERSES FOR CHILDREN
Sadly, the last of this series.
THE QUEEN OF THE BATS
The Queen of the Bats in her dark, dark tower,
Was watching the moon at the midnight hour.
She let out a shriek that pierced the night...
'That wretched moon is far too bright!'
The moon just smiled in its appointed place,
With a look of benevolence on its face.
'Switch off the moon!' she screamed again
'The night is the Queen of the Bat's domain!'
But still the moon sailed by on on high,
Bringing its light to the midnight sky.
'Though you may shine as white as milk,
I'll capture you in my gown of silk!'
So saying, she sprang from the parapet,
With her bat-like wings as black as jet.
She aimed for the moon with all her might,
Swooping up to a dangerous height.
Up, up she went, still shouting out
'I'm coming, old moon, to put you out!'
But, just as she reached the stratosphere,
A cloud, that had just been hovering near,
Covered the moon! It was very weird........
The great big moon quite disappeared!
'I've won! I've won!' cried the wicked Queen;
'The moon will nevermore be seen!
All nights from now on with be black as pitch!
It all went off without a hitch!'
She flew back home feeling mightily glad
Because of the great success she'd had.
*
But her satisfaction was ended soon!
On the following evening,
There was the moon!
*
-------------------------------------------------------------------- 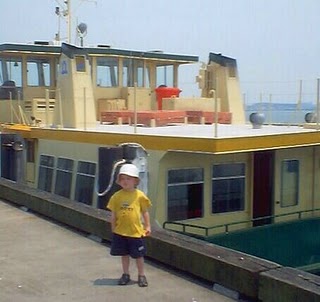 THE QUEEN OF THE BATS: A tale to remember, just like they say about the Ostrich... burying its head in sand..!!!

MY YELLOW FERRY: No, Blake doesn't look like the Captain. He looks like the Owner of that ferry..!!! :)))

Both wonderful takes given out to the children. I especially enjoyed the 'Queen of the Bats' one connecting to the fabulous prompt left by BKM.

Blake does look like the owner, I like the idea that he is both owner and CAPTAIN of this ferry.

Thanks for sharing here, such an important prompt that has been offered here.

Rinkly a brillant take on this prompt and so glad the moon won in the long run....
Also there was such an outcry this morning to continue Monday's Child that I decided I would do that...I really did not know there was that many who were that interested in supporting the blog...so thank you and Monday's Child will be back next week...with renewed enthusiasm....bkm