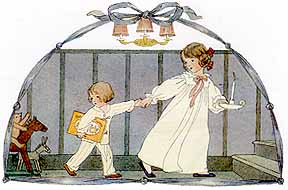 THE MUSICIANS OF BREMEN.


A poor old mule was listening as he stood at the cottage door
And he heard the farmer grumbling 'Goodness knows what he's for!
That old mule is worse than useless!' And then the good wife said
'I agree! He's certainly much too old! I think he'd be better dead!'
The mule heard his owners planning to put an end to his life,
Though he'd given such faithful service to the farmer and his wife.
'I'll not stay in this place any longer' said the mule, and then he planned
To escape and run off to Bremen, where he hoped to play in a band.
'I'll be off on the road by morning; I certainly know the route.
And when I get to Bremen I shall learn to play the flute!'
Sure enough, the very next morning, before it got too late,
The mule ran away from his masters, kicking down the farmyard gate.
He hadn't gone a great distance when he saw a doleful sight;
An old dog lay shaking and panting, having slept in the grass all night.
'What ails you?' the mule then asked him and the poor old dog replied
'If I'd stayed with my faithless master by now I would have died!
He says I'm too old to work now. He wont even feed me crumbs!'
'Then join me and travel to Bremen! You can learn to play the drums!'
Thus the mule encouraged him and they made a curious pair
As they set off going to Bremen to be musicians there.
Before long the two friends met with a poor old mangy cat,
Scrawny and thin and sickly, which once had been sleek and fat.
'I've been cast-out into the wide world, from my life-long cosy house!
Since my teeth fell out I've been useless; I can't even catch a mouse!'
So spoke the cat, with a whimper, but the mule said 'That's alright!
You can be a musician in Bremen for you know how to sing at night!'
So now there were three fellow travellers, and soon they gave a shout,
For they chanced upon a rooster whose feathers were falling out!
The rooster was weeping and wailing and this is what he said
'If I hadn't left my farm tonight tomorrow I'd have been dead.
I heard my masters talking and I understood their plot;
Because I'm old they were planning to cook me in a pot!'
'Now you're a great morning singer' the welcoming mule declared
'Come with us to Bremen and our troubles can be shared.'
Now, on the road to Bremen, in the middle of the night,
They passed a little cottage; from the window shone a light.
So they crept up to the window and peeped inside to see
A band of wicked robbers, all feasting  merrily.
Before them on the table lay, oh wondrous to behold,
Enormous piles of tasty food, and bulging sacks of gold.
The mule and his new-found friends declared they would wait until the night,
And then they would raid the robbers' house, giving them an awful fright.
With all the robbers sleeping and enjoying pleasant dreams,
The musicians broke into the house! And then imagine the shouts and screams!
The robbers dashed outside post-haste, trying to work things out!
'That was one awful Monster' said one 'Without a doubt!
It had terrible feet to kick with! It had great big yellow eyes!
It had teeth as sharp as needles! And it made the most awful cries!'
'We dare not return!' said another. 'Let the Monster keep the lot!'
And all agreed that the Monster was welcome to all they'd got.
The robbers slunk off in the shadows and never returned again,
While the four Musicians sat down to feast, eating with might and main.
So they never became Musicians, for the gold let them live in style,
And all they did for the rest of their lives was smile and smile and smile!

These are both absolutely wonderful. Love the fun! As a kid, I never wanted to go up to bed, was afraid I would miss something good. Smiles.

The first poem caught the feel of the illustration exactly.

I love this little ones concern for the feelings of his pets, and the rhyme is delightful...I am glad he still cares....blessings...bkm

A great pleasure to read these. Thank you.

MONDAY'S CHILD: best is to tuck in all the toys with the kid... everyone's then happy..!!!