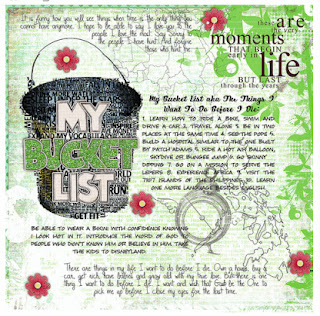 WE WRITE POEMS
http://wewritepoems.wordpress.com/
BUCKET LIST
This is someone else's Bucket List;
I discovered it on line.
When I saw the word 'bikini'
I knew it wasn't mine!
I haven't got a Bucket List;
There isn't time for one.
I'm very nearly eighty,
So my life will soon be done!
*
I expect that sounds quite morbid,
Sort of hopeless and distressed,
And anyone under thirty
Must be madly unimpressed.
But I am one of the fortunate
Who, almost without trying,
Finds myself, at the end of life,
In a state that's satisfying.
*
Daredevil tricks like abseiling
Have never held appeal
So, even in my early days,
They were never part of the deal.
My Bucket, if I'd had one,
Would always have been achievable;
No jumping off Mount Everest.....
For me quite unbelievable!
*
No, my list would have been simple,
Had I made one in my youth.
Travel, Writing, Family.
That's all, and that's the truth!
So now my Bucket's empty,
With nothing left to hold.
It all came true, so here I am
Simply growing old.
*
------------------------------------------------------

STOW-AWAY
(A true story.)
When a journey begins badly it rarely ends too well.
Too many unwise  travelers have a sorry tale to tell.
Take my friends, Alf and Noela, in their nifty caravan.
They should have guessed their trip would fail from how badly it began!
Alf is not too fond of cats! Well, there are folk like that!
He gets all sort of twitchy when confronted by a cat.
But he bore up very bravely when they called in on old friends,
And, when the cat came up to him he tried to make amends.
While they were sitting chatting and drinking cups of tea,
He let the cat get friendly and purr around his knee.
Next morning, thinking all was well, they set of home once more,
Cheerily saying their goodbyes at their old friends' cottage door.
But their journey started badly as you will soon find out;
Although it was a good four hours before things went up the spout.
They stopped at a wayside picnic spot to have a little snack
And Noela went to get things from the caravan at the back.
With a piercing shriek she called 'The cat! The cat is here inside!'
And, sure enough, the moggy had hitched a little ride!
Alf stamped and stomped and carried-on, as do all angry men,
But they both agreed that they must take the cat back home again!
So four hours back they drove at speed, so the cat could be returned,
And then they started off again! You can guess how rubber burned!
*
There's a sequel to this little tale! You may find it amusing.
But animal-lovers may, I fear, find it pet-abusing.
Two weeks after their return a phone-call was received.
And Alf and Noela found the message hard to be believed.
The little cat had met its end going underneath a car!
As Alf said 'What a waste of time driving back so far!'
*
Posted by Rinkly Rimes at 10:38 PM

I have a Bucket List - nothing like climbing Mount Everest or flying to Mars on it though!

I enjoyed your travellers tale of woe ... can't understand not liking cats though!

Brenda, these are amazing! They are really entertaining and deep! I love them both.
I am really glad I came by (checking the We Write Poems contributors, in fact).

Have you seen the film The Bucket List? It's one to watch.

Nice. I will have to add this to my bucket list.

BUCKET LIST: I think you live each day wonderfully, in full. And that is all that matters.

Both poems terrific: Bucket list is just about how I see things too. The cat one is sick: very funny, but sick!

Quite wonderful!The last few lines left a happy note.... achieving something in life, isn't it great?