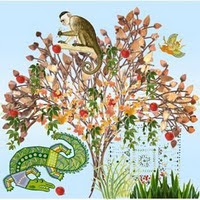 TAKE HEART!
There once was a orphan monkey, living alone in a tree,
And he often used to sigh and say 'No-one ever visits me!
This tree is full of tasty food on which I can depend,
But it's absolutely certain that there's nothing like a friend.'
Now a crocodile came swimming by, out foraging for a snack,
And one of the monkey's luscious fruits just landed on his back!
He snapped it up and gulped it down and looked up for some more,
And the monkey was delighted and gave some from his store.
'I'll give you all the fruit you want if you'll keep me company!
There's food enough for everyone up in this bounteous tree!'
Then juicy fruits came tumbling down in exchange for a friendly chat
And the crocodile envisioned getting comfortably fat.
The crocodile, who couldn't climb, had the luncheon of his life,
And he even saved the leftovers to take home to his wife!
She was delighted with the feast and called for more and more.
She'd never eaten so much food in all her life before!
So, day by day, the crocodile came swimming to the tree,
And, in exchange for a little chat, he lived right royally.
Then, one fine day, his wife declared 'Since this lovely fruit's so sweet
Just think how quite delicious we would find some monkey-meat!
If the monkey eats fruit every day his flesh must taste divine!
Please, husband, bring him here to me and then we can really dine!'
So the crocodile spoke warmly to the monkey in the tree.
'My wife is wanting to return your hospitality.
If you jump down upon my back we'll enjoy some conversation
While I am carrying you along to a pleasant destination.'
The unsuspecting monkey leaped on the back of the crocodile
Which wore upon it's evil face a very cheerful smile!
The monkey, of course, was chattering, as the crocodile swam along;
They couldn't travel swiftly for the current was quite strong.
He said ' I'm rather hoping we will eat banana stew'
And the crocodile responded 'My dear friend, we're eating YOU!'
The monkey, for a moment, was appalled and scared to death!
He sat motionless and silent and he couldn't take a breath.
But monkeys, as the whole world knows, are noted for their wit,
And this monkey, who was brainy, shouted out 'Hey! Wait a bit!'
I know that I'll be tasty, every tender little part,
But the fact is that the best piece is my juicy little heart!
And, do you know, I've left it on the shelf just by my bed!
Oh, I'm a silly monkey! I must learn to use my head!
Never mind we'll keep on swimming; I'll taste reasonably good,
But I'd like to treat you to my heart. Oh, if I only could!'
'We'll go right back and fetch it' said the crocodile, at once.
'If I don't get my wife your heart she'll think I'm just a dunce!'
So back they swam to the monkey's tree and the monkey climbed post haste,
While the crocodile just waited, thinking how good hearts must taste.
Well, he waited and he waited, and I guess he's waiting still.
As for the little monkey, every day he eats his fill.
A crocodile's a tricky beast, and, you know, I have a hunch
That it's wise to think it over if one asks you out for lunch!
*
----------------------------------------------------------------------
PS
The first two weeks of January are always a little sluggish but, thank goodness, the year is picking-up!
In fact, any moment now I shall complain about being run off my feet! On Monday we had a Committee Meeting, followed by Choir Practice. Then, on Tuesday, it was Bev's birhday and we all met at Mary's house. 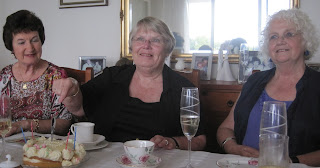 Here is Bev cuttting her cake (which has gone a little lop-sided in the heat!) 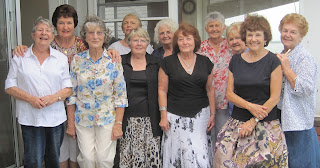 And here we all are on the balcony. Some of these faces must be getting quite familiar! 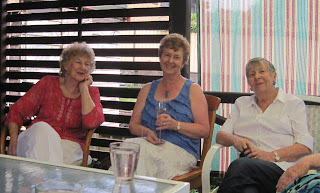 Straight off to Book Group. As you can see, there was no time for me to change my clothes! Gwen (just recovering from knee surgery) and Joy look much fresher! We had a film discussion and we concentrated on 'The King's Speech' which we all enjoyed mightily. Then there began a random chat about Royalty! Joy and I got quite heated for and against Lady Di!  Oddly enough, a visitor from Britain was amazed that we cared! She said British people hardly notice the Royal Family these days! 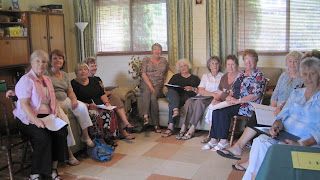 On Wednesday we had a rehearsal at Betty's house. (Betty is in green, second from the left.) The first run-through was chaotic, as we slotted in Power Point stuff for the first time! But the second try wasn't too bad!
*
Posted by Rinkly Rimes at 7:47 AM

THE CABINET: Can see that the Cabinet is only a window to trigger the thoughts to infinity.

TAKE HEART: By saying its Heartless, the monkey escaped...!!!

OH I just love your rhyme. Your cabinet photo can be a page in a book!

Shiny, this cabinet... It enlight our weekly contest, just as your lovely words...