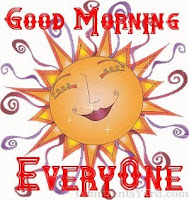 RISE AND SHINE!
(An Acrostic)
Refreshed we greet the morning sun.
If day has come, the night is done.
Sleepily we rub our eyes.
Each day is a new surprise.
*
All the birds are singing madly.
'Night has gone!' they whistle gladly.
Daisies sparkle in the grass.
*
Sailing by, the white clouds pass.
Happiness is everywhere,
In the sky, the earth, the air!
Now's the time to dance in clover!
Except for me!
I'll just roll over!
*

THE JOURNEY!
(A Poem for Children)
Major was an elephant with ideas above his station.
To see the world from up above, that was his inclination.
He padded round his zoo enclosure looking at the sky,
Thinking sadly ' Why is it that elephants don't fly?'
He asked his Keeper one fine day and earned this sharp retort...
' Take it from me, old Major, you're just not the flying sort!'
His friend, Giraffe, spoke kindly, and said 'Your trunk is great!
Many another creature would like to share your fate!
Like my long neck, you have a gift that sets you quite apart!
Many a bird would like a trunk but doesn't break its heart!
It just accepts that elephants have trunks and birds have wings,
And lots of other animals have lots of other things.
Look to the earth, dear Major, and see the glories there.'
But Major kept on brooding, gazing up into the air.
He really pined, he hung his head, he went right off his food,
And thoughts of flying in the sky would constantly intrude.
He started wobbling on his legs and looking really sick,
Till his Keeper said 'To the Hospital! And make it double quick!
The traffic's heavy on the roads! I doubt if we'd get by!
Oh what an awful pity that an elephant can't fly!'
'I know' cried Danny, the young boy who worked around the yard,
'Let's tie him to a big balloon! It wont be very hard!'
So they rang up a Balloon Man, who came there very quickly,
When they told him that an elephant was looking very sickly.
They harnessed Major carefully, as the people gathered there,
And very soon that elephant was sailing through the air.
They even supplied a telescope for looking at the view,
And he held it in his trunk as only elephants can do!
He saw the sea, he saw the ground, he saw the earth below,
But the big balloon, blown by the wind, started drifting to and fro!
It twirled around, it bounced a bit, it didn't miss a trick
And soon poor Major bellowed out 'I'm getting travel sick!'
So they brought him back down to the zoo, and he stood there looking shaken!
He said 'I always longed to fly but I was much mistaken!
I wont be silly any more; I'll eat and I'll get strong!
I know now I'm an elephant and I know where I belong!
I belong with four feet on the ground, with the members of my herd.
I'm glad that I'm an elephant and not a little bird!'
*
Posted by Rinkly Rimes at 5:40 PM