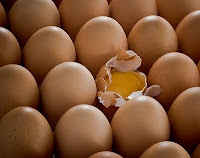 THEME THURSDAY
http://themethursday.blogspot.com/
supplied the prompt
FATE
An ant may crawl across the ground
Full of joi de vivre
Until he's stamped on by a boot
And has to take his leave.
Fate plays some nasty tricks sometimes,
Whether we're ants or men,
We know a boot may stomp on us,
Though we're not certain when.
Just take this egg, so cruelly cracked,
With its yolk all unprotected,
Fate surely played a trick on it,
When it was least suspected.
While other eggs in ordered rows,
Look brown and porcelain-ish,
Ready to serve as all eggs must,
Whether they're Dutch or Danish,
Our broken egg's a useless thing,
Maybe already smelly,
Destined for a garbage bin,
Not some up-market deli.
Did someone drop a rock on it?
Did a bird fly down and peck?
What form did Fate take in this case,
Creating a total wreck?
It's Mother Hen was oh so proud
When this little egg appeared;
After all the strain of pushing
She, with a cackle, cheered.
To think that all her effort
Has been wasted after all!
When she so hoped that it would be
The pride of the shopping mall!
The other eggs look smug I think,
They think they have fooled Fate,
But it will get them in the end,
When they're dished-up on a plate.
*
The moral of this story is
'Fate always wins the fight.'
And if we thought too much about it
We wouldn't sleep at night!
*
-------------------------------------------- 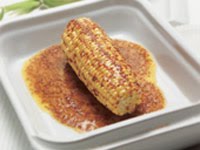 Corn on the Cob? Could anything be blander?
But corn plus zing and nothing could be grander.
Easy as can be, tasty and hearty
With everybody chomping at that special party.
A dribbly success from the time you begin,
But you might need a napkin to wipe your chin!
My recipe's for four so make sure you multiply
If the whole of your local soccer team comes by.
Mix honey and mustard with that dash of margarine;
Go on! Splash out! Don't be mean!
Microwave on high for less than a minute,
Then get a dish and put your corn in it.
Pour over marinade and and let it sit a bit.
Already the smell says 'This is it!'!
Microwave for eight minutes, giving corn a turning
Halfway through; it'll cook without burning.
A great addition for any meal,
And for a barbecue, just ideal!
*

I like the first stanza, it says a lot about life..you just never know

Hi. This morning I was looking at a photo I have of a newly hatched chic but unfortunately I neglected to copy it to my flash drive, what a pitty. Chickens by the way don't cluck when they lay an egg, they make one hell of a racket and the whole farm knows about it. Yep! eggs are really smug things are'nt they, he, he.
If you lived in Rhodesia or Cape Town then you will know what mealies are and just how good they are on a braai. Thanks for the recepe. Love your poetry by the way. God bless, Geoff.

Fate, eh?
The recipe sounds wonderful and all the better for being in verse :-)

Beautifully written!
and
I Love corn on the cob!

You write so naturally that I wonder if you think in rhyme. :)