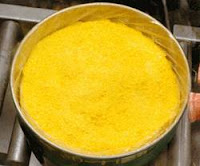 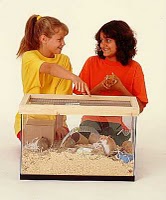 I tell the tale of two naughty girls! We were ten or eleven years old.
We were into secrets in a big way, secrets not to be told.
We whispered to each other that we badly needed mice.
Although we both had cats and dogs and all of them were nice,
We wanted tiny little pets we could hide inside the house.
And what better for a secret pet than a harmless little mouse?
We prepared with the utmost caution so everything was fine.
I even stole a little piece of my brother's railway line!
This was to make a sort of frame for my mouse to run around;
And I put it inside a cardboard box that, luckily, I'd found.
I made little air-holes in the box, and put in a tiny dish
For my mouse to use for food and drink, whatever it might wish.
We saved-up our pocket-money  and on the appointed day
We set off for the pet-shop, which was quite a way away.
We very quickly discovered there were only two mice left.
Bella bagged the white one; I felt cross and bereft
For I had to have the brown one and I really wanted white.
But Bella always got her way so I didn't put up a fight.
The two mice stayed the night in a spare room at Bella's house
And I went home and dreamed about my purchase of a mouse.
But our dream was rudely shattered, as soon as morning came!
Bella's cat went ballistic and it was normally so tame.
It scratched to get inside the room and once it saw its prey
It gobbled up my brown mouse! The white one got away!
But the white one jumped inside a drawer and peed on laundry there!
And visitors were expected! The room had been cleaned with care!
Bella's mother heard the story and she really blew her top!
I was called a 'bad influence' ! Our adventure was a flop!
The mouse had cost me a shilling, and I hadn't wanted the brown!
I felt that life was most unfair. It really got me down!
Bella bought a proper mouse-house for her wretched little creature!
It had a window made of glass as a very special feature!
After that our friendship was never quite the same!
Bella got all the kudos! I got all the blame!
*

My birthday was on February 1st, but the family marked it yesterday. When I was growing-up in England, my birthday always seemed to coincide with the bleakest day of the year! Yesterday we sweltered, as I think becomes obvious when one views the red faces in the following shots! The temperature climbed to well over the 'old' 100 degreees, and the chosen restaurant (it had a children's playroom attached) only had fans! Even so, we had an enjoyable time.

We had to eat it quickly before the chocolate melted! 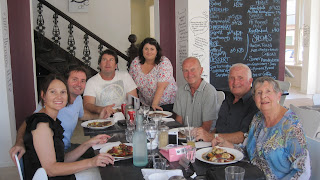 Here are the adults; the children were in the playroom. Brian is saying 'Oh God! Not another photograph!'
﻿ 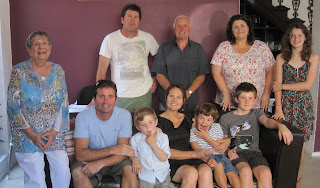 Here is the 'group' photo, with the two little boys being uncooperative in the way of all small boys! The young girl is Laura, Blake's friend.
And here are 'my' three boys . 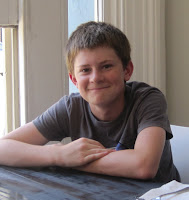 Blake, who's turning into a charming young man before our very eyes. 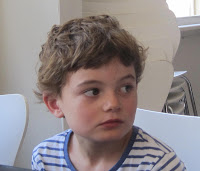 Harry  with the smouldering good looks. 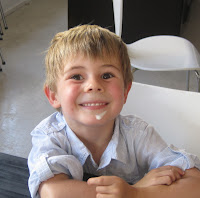 And Max, who was born with this expression on his face!

I positively glowed, partly with family pride and partly with the heat.
*
Posted by Rinkly Rimes at 7:02 AM