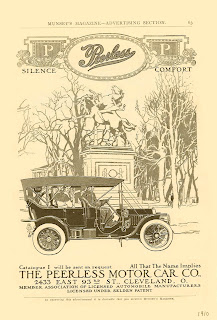 MELLOW YELLOW MONDAY
http://mellowyellowmonday.blogspot.com/
PEERLESS
I suppose it doesn't pass as yellow;
It's merely sort of honey-mellow.
It's merely a sort of weathered gold;
And it has the air of rich and old.
This poster, when it first was hung,
Spoke of daring to the young.
Girls called Flappers would take their seats
Ready for all sorts of treats.
*
The Terrible War was left behind;
Now came adventure of a different kind.
It's hard for us to empathise,
Being so jaded, blase, wise,
With the excitement of the age,
When the world had turned a brand new page;
When rich girls led a life of ease
And, being daring, showed their knees.
*
I lived through the years from 1950,
When life was, oh, so dour and thrifty,
Into the 1960's when
Vivacity came back again;
From rigid morals, tight-lipped prudes,
To different ways and different moods.
That transition was exciting!
Everything seemed so inviting!
*
But the era of the 'Peerless' car
Was much more life-changing by far!
This poster shows the elegant side.
We won't ask what went on inside!
*
------------------------------------------------------ 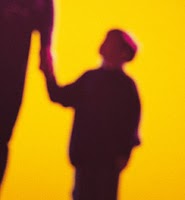 IT'S IN THE GENES!

Anthony was puzzled; he stood and scratched his head.
'Who was it made us, Mummy?' the little boy then said.
'Well, we're descended from monkeys' his mother said, and smiled;
'Our ancestors lived up in the trees; they were animals, and wild.'
Just to make sure, the little boy then asked his Dad the same.
'Daddy can you tell me how human beings came?'
'We were made by God' said Daddy.' He made us in one day;
We're noble, brave and perfect; God fashioned us that way.'
Anthony frowned a little; he wasn't satisfied.
'You and Mummy tell different stories'. (That couldn't be denied!)
'You say that God has made us; she says we're from the trees.
Surely one of you is wrong! Daddy! Explain it please!'
'Ah, that is very easy' said Daddy, 'We combine.
She's talking about her family;
I'm talking about mine!'
*

Whoo hooo. Don't you wonder what went on in those cars? My grandmother used to say, "Oh, you kids think you invented sex!"
good one.

Superb as always. Love the ending.

I think it must have been an exciting time. Always thought it'd be fun to be a flapper!

A damsel who loved shades of yellow
One Monday let out a loud bellow:
“My gold is long gone,
My amber and fawn—
Just wait till I find that vile fellow!”

hey there! I am following your blog, visit and follow mine 2! tnx.
http://clavsupclose.blogspot.com

Excellent Brenda. I laughed out loud at the seond one! :O)