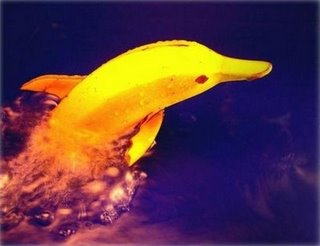 Invite a friend round for a pizza then give her a crazy surprise!
It wont be what she's expecting and you'll see her widen her eyes!
No cheese, no bacon, no olives! Well, nothing Italian at all!
No savoury, sizzling aromas to waft to her nose down the hall.
For this is the sweetest of pizzas! Yes, this is a peach of a pie.
A wonderful treat for the summer when peaches are in top supply.
For the crust take the butter and sugar and mix in the flour with a will;
Then press in a pizza pan firmly. (There! That didn't take too much skill!)
Let it cook fifteen minutes (350) and then set aside. Let it cool.
Then brush it with jam that you've melted; I use some peach jam as a rule.
Beat together the rind and the cream cheese, with the whipping cream there in the mix.
It will thicken and blend very quickly. (So that was quite easy to fix!)
Take six peaches and peel them and slice them. (Yes, take out the pitted parts too)
And arrange them on top of the cream cheese as the pastry-chefs all seem to do.
Make a glaze out of juice, jam and sugar, with some cornstarch to help it all blend,
Then boil it all up till it thickens. Don't worry! You're right at the end!
Paint it over your pizza to glaze it, let it cool and sit down and admire!
You'll agree it's a peach presentation! And you didn't even perspire!
*
Ingredients
CRUST 1/2 c Butter 1/4 c Sugar (confectioners) 1 c FlourFILLING 2 tb Peach jam melted  1/4 lb Cream cheese  1/2 c Whipping cream
1 ts Orange rind grated  6 Peaches peeled, pitted and slicedGLAZE 2/3 c Orange juice1/2 c Peach or apricot jam2 tb Cornstarch
2 tb Sugar, brown
*

The last week has been fairly quiet as Mike has been off in Adelaide visiting his other Australian relations. However, 'Tiddly Pom' was performed for the last time at the Church Hall on Tuesday, and it was a particularly delightful event for me as I had lots of old frends there, from the Central Coast, where I used to live.
Later in the week Malcolm had a pleasant outing in his historic car, to Murrays Beach, which is a delightful settlement on Lake Macquarie. 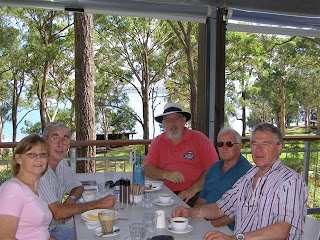 Malcolm chose to look like a member of the Mafia for this one but he assures me was having fun. 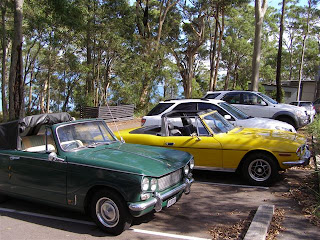 And here's his little green Triumph enjoying the sunshine. 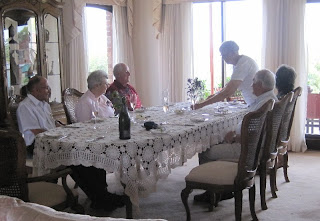 Then, yesterday, we were invited out to lunch at Roz and Errol's house and it was only when we arrived that I discovered that it was a belated birthday celebration for me. What a nice surprise! 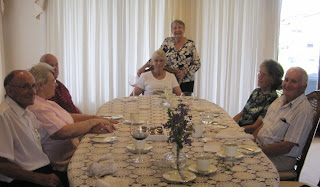 How nice, what a lovely birthday party. Happy birthday again!

I can't help but notice that gorgeous tablecloth, too!