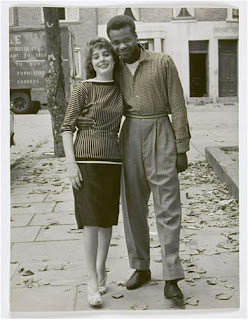 POETS UNITED
http://poetryblogroll.blogspot.com/
suggested something prompted by the old Sydney Poitier film, 'Lilies of the Field'.
IMPOSSIBLE?
I am turning my mind back now to a very different time,
When racial discrimination was not considered crime.
We all think we're clear-thinking with minds all of our own
Yet all of us are brain-washed from our birth if truth were known.
I remember the nineteen-fifties, when people toed the line;
After the ravages of War compliance was just fine.
Certain things just 'were not done'; we were beset by rules
Dictated by our parents, our churches and our schools.
I could list a thousand that seemed normal at the time
But that would have me writing a long and rambling rhyme!
I don't remember discussion, just a lot of unwritten 'laws'
That kept us on the straight and narrow, free from social flaws.
*
Whites just did not marry Blacks; there it was, in black and white.
But then, I'd never seen a Black man so that seemed all right.
There was no discrimination, because how could it arise
When even a Black man in a film was a matter for surprise?
I lived in a little village in the English countryside
And, looking back, I guess our lives were completely ossified.
They were comfortably narrow, in a way now quite departed;
Smug, unknowing, cosy but definitely not hard-hearted.
I repeat 'discrimination' didn't apply at all;
The subject was simply not discussed by us, as I recall.
*
Then I went to live in London where 'real life' could be found;
I lived in Earls Court with a friend,  travelled on the Underground.
Everything was exciting, everything was new.
I realised not all that I'd believed was really true.
My life was changed for ever in very many ways
But one scene has been with me throughout all my many days.
I looked out of the window and did a double-take!
*
Was that a girl with a Black man? Wow! For goodness sake!
It wasn't a case of horror or thinking it was wrong,
It simply was a little scene that didn't quite belong!
How could this be? How very strange! I couldn't quite believe it!
This was something utterly new and I couldn't quite conceive it!
As I watched the couple walk away, with loving arms entwined,
There really was great turmoil going on inside my mind.
*
Brain-washing is insidious; it works and we wonder how.
Ask yourself.... is it possible we're being brain-washed  now?
For now we are cocooned and simply haven't got a clue,
But who knows what we're believing that, in time, will prove untrue?
*
-------------------------------------------------- 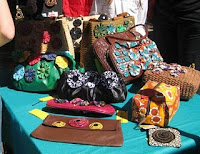 I could buy a brown bag since nothing could be duller.
I could buy a black bag , a really useful colour.
I could buy a white bag , so everything was blending.
I could buy a grey bag with usefulness unending.
But I think I'll buy a bag like these; I'll choose one in a minute.
One of these would be just right! I'll store a rainbow in it!

You AMAZE me! Splendid, once again.

great response - you nailed the theme.

Brenda your racial poem is amazing.

I remember those years. You described it so very well.

Yes I remember them too, in the 70's have lunch with a black friend and we were stared at....glad those days have passed....bkm

Well Done! I never understood why this happened to other humans?!

Greetings, how are you?
Write a free verse 4 Poets Rally, enjoy poetic friends, you are invited!

Hope to see you in,

Love your poetry talent and looking forward to a profound experience with your input.

an old poem would work as well.

I often wonder how much of what we believe now will later be proven untrue.