To the Lady in the Mirror 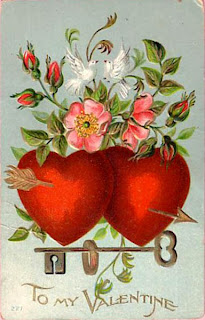 Why not Valentines to ourselves?

TO THE LADY IN THE MIRROR
I send no card to the lady I see before me now
For she's frayed around the edges and not worthy of a bow.
I send no card to that person I see with the mottled skin,
For she is just a receptacle to keep my being in.
But I send a card to a friend of mine who lives inside of me,
For she's a  great companion and I love her totally.
I've had a lovely life with her, in almost every way,
And to her I send a Valentine on this very special day.
*

'Every picture tells a story'. You must have heard that said.
And this is the famous balcony of which you've often read.
Well, this picture tells two stories; there's the balcony of course.
And then the crowds of tourists, gathered there in force.
*
Let's look back at the story of Romeo et al,
A tale resembling the musical called....wait.....'Me and My Gal'.
No, I'm not being disrespectful! Any student would avow
That the lovers were teenage sweethearts, as we understand that now.
*
Their love might not have stayed the course; fate didn't give it time
Because their little dalliance was cut short by a crime.
Had they both lived to a ripe old age their ancient love-affair
Might have proved to be a nothing; we wouldn't even care!
*
It's Shakespeare's words that turned the tale into into an epic story!
His language turned a dalliance into a glimpse of glory.
But he never went to Verona, and the story itself was old,
Long before a famous Bard turned it into gold!
*
But surely the balcony itself is a genuine artifact!
(I'll try to ruin your romance with a modicum of tact!)
The city of Verona had a tourist industry,
And, with Juliet in mind, looked around for a balcony.
*
'This one will do' somebody said; 'We think the age is right.
It's really rather picturesque! Yes, it will do alright!'
So now the tourists flock to gaze at 'Juliet's Balcony'
Not realising they've been duped! What rank duplicity!
*
Yet still there lingers in my mind the urge to be serenaded
As I stand upon a balcony! The dream has never faded.
The alchemy has done it's work; I'm influenced even yet
By the magic of the love-affair....'Romeo and Juliet.'
*
Posted by Rinkly Rimes at 5:16 AM

This blog is a great source of information which is very useful for me.