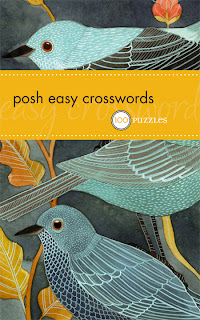 WALKING ON EGGSHELLS
(An Acrostic)
Why is it, when you speak to me
Always I feel some timidity.
Looking for right words to choose,
Knowing that I am going to loose.
I want to feel at ease and free
Not suffering this rigidity!
Goodness knows I do my best!
*
Only I never pass your test.
Numerous times I've thought 'Don't care!'
*
Every time the tension's there!
Guessing what I've said to cause
Glazed expression and pregnant pause!
Should I treat you casually?
Heavens! That's how you treat me!
'Eggshell walking'! My description!
Less anxiety! My prescription!
Let me not be the one who squirms!
So we can meet on equal terms!
*
-----------------------------------------------------
PS
It seems almost obscene for me to be writing about trivia when Queensland is facing yet another disaster; this time a cyclone, the biggest ever recorded! It is said that the energy of it could power the whole world for a year! Of course, Queensland has a definite Cyclone Season, so they're accustomed to it, but large towns and big populations have sprung up since the last big one, so who knows what effect this will have. The storm surge is going to cause flooding again! Queensland's motto is 'Beautiful one day; perfect the next'!!!!!!

However, I will tell you about my Birthday Bash because, as the saying goes, 'life goes on'. In the first place, it wasn't really a Birthday Bash; it just happened that our annual Family and Friends concert for the Merry Mellows fell on my 80th birthday so I was only too pleased to kill two birds with one stone. 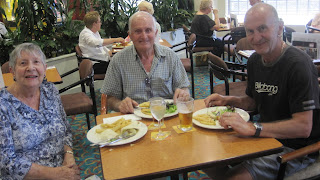 In the morning I went to Malcolm's Probus meeting, so that was an un-birthday affair, and we followed this with a light lunch at a Club.

Then the evening shenanigens started badly, as the heat was deadly; while we were preparing, moving furniture etc, we were all so hot that everyone appeared to have washed their hair! And an altercation with the Chef cast a slight cloud. However, the actual play was a huge success, because the audience entered into the spirit of things and hissed and booed and cheered in all the right places. It really was the best sort of birthday experience I could have had. And (for Ruth) Mike was invaluable as background music organiser and photographer. The photos aren't great as we decided to take them without a flash so as not to disturb the audience. So they're grainy, but they capture the atmosphere. 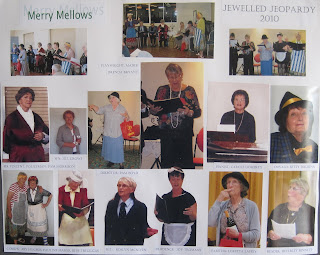 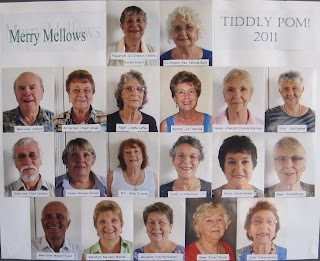 This year's cast. The play is called 'Tiddly Pom'. 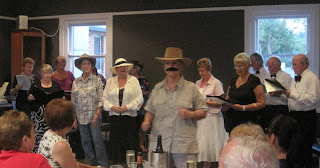 Most of the cast, with Hacker, the wicked landowner to the fore. 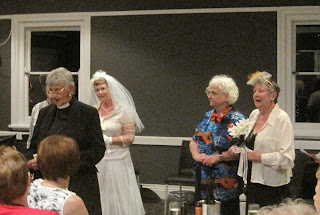 The Wedding Scene, during which the Vicar (and most of the audience) have too much to drink. How do you like my natty head-dress?
Now what shall I do for my 90th?
*
Posted by Rinkly Rimes at 3:09 AM

Hi Brenda. Well, that's the perfect book for me. I love crosswords and I love birdies.

Dashing little hat. Have a party and wear your wedding dress for your 90th!

Our thoughts are with Queenslanders.

WALKING ON EGGSHELLS: Can read this poem any number of times... and keep learning ' a lesson'

PS: The Playwright Co-Director has really enjoyed the bash and the celebrations..!!! The head-dress in real trendy :-)))

oh my god I'm in love with you! ok, I'm not a stalker, and may have had too much coffee this morning, but I really enjoyed this read, and your poem!