The humour is somewhat macabre
But the message is quite crystal clear.
Don't be tempted to risk life and limb
For the sake of some wine or some beer!
But this sign doesn't tell the whole tale;
Drivers take many risks for a thrill;
But it isn't their own life at stake;
Other lives go if they kill.
And what of the medics and such
Who have to be first on the scene?
They're mentally scarred for all time
By the terrible carnage they've seen.
And families grieving for years
Are part of the price that is paid.
A skinful of drink for all this!
It doesn't seem much of a trade.
*
--------------------------------------------------------- 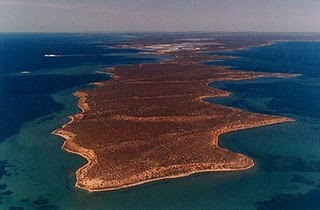 USELESS LOOP
Where in the world is Useless Loop!
I've certainly never been there!
And with it having a name like that
I wouldn't want to be seen there!
It's over in Western Australia;
It looks an arid place,
But with a name like Useless Loop
It can't be commonplace!
In fact it's the home of salt ponds
So at least it has some worth!
And from those salt ponds comes, they say,
The purest sea-salt on earth.
*
Posted by Rinkly Rimes at 7:43 AM

How interesting! I use sea salt all the time!

Good point - drunk drivers never think they may be affecting others.

That road sign is a bit of a shock. I love your reply poem, Brenda. Thanks for sharing your blues.

The sign can make a difference hehe. Happy blue Monday.

What a wonderful and informative blue post. I loved both shots and your thoughts.