Would he have been as defiant if he'd had a different chin?

What if his lips had been pursed-up and rather mean and thin?

What  if his nose had been aquiline, pointed and rather haughty?

Would he have been eager to order another sorte?

If his hair had been blonde and curly and reaching to his waist,

Could he have faced the enemy as an enemy must be faced?

If he'd looked a bit like a poodle and not one of the bulldog breed,

Could he have saved the country in its hour of need? 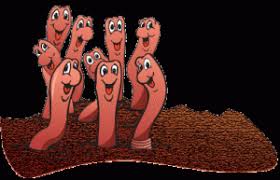 Worms are hardly things of beauty

They wriggle  and they've got no eyes

But they set-to and do their duty

And so we should not despise

Their lowly lives and boring features

For they labour and they toil

The most despised of slimy creatures


Aerating all our garden soil.


We glory in the pretty flowers


Forgetting that they all abound


Because the worms are working magic,

Out of sight and underground.
*
Posted by Rinkly Rimes at 6:34 AM