If I could catch a rainbow

I'd tear it into shreds,

All the yellows, greens and blues ,

The purples and the reds.


When a rainbow is so fine?


Why any normal person


Thinks a rainbow is divine!'

I'd be looking for a colour

That is absolutely new,

Or that very humdrum blue,

But something the world has never seen,

That hasn't yet been named,

A colour we can't imagine

And no-one yet has claimed.

Try to dream-up a colour

That's not a tint or blend

Wouldn't it start a trend!

It exists  on another planet.

But it can't hurt to search for it 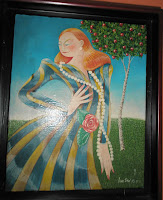 Elvira de la Porteus was wearing on her back
A rather shapeless garment just a little like a sack!
The only hint of fashion was a red rose at the waist,
Designed to show that she was still a lady of great taste.
I was amazed because, my dears, Elvira is so rich!
She's also (but don't tell a soul) a really nasty bitch.
She'd been driven to my studio in the family limousine,
The smartest most expensive car that I had ever seen.
She swept into my rooms as though she thought she owned the place
And felt that I was just a blot upon the human race!
'Before you start' Elvira said, 'I have a tale to tell.
Let's start with the fact that, yesterday, I wasn't feeling well.
We were actually entertaining guests, one of them Rosy Coutts,
You know the one, the model with the obvious.....attributes.
Laughingly I just remarked I could possibly be dying;
Of course I was only slightly ill; I was joking! I was lying!
But the glance that passed between those two, my husband and that Rosy,
Was, how can I describe it, a great deal more than cosy!
Suddenly I realised that he hoped my death was due
And he was already lining-up little wife number two!'
I butted in 'Dear lady, what has this to do with me?'
Said Elvira 'Paint a portrait of me in my jewelry!'
'But you're not wearing any!' I voiced my consternation.
Said she 'I'm giving you your best chance to use your imagination!
Paint me in a glorious gown, up-market haut couture,
Although the dress itself will be a backdrop, that's for sure.
Then go town on jewelry! Let it drip, and drop and drape,
Let it fall across my shoulders like a diamond-encrusted cape!
Let pearls cascade around my neck and reach down to my waist
Let rubies shine on bracelets and never resemble paste!
And let the ear-rings that you paint me be weighted down with gold
With precious gems of every sort nestling in every fold.
Of course, I must look beautiful, that's easy as can be,
But I want the jewels to outshine the beauty that is me!'
'Why on earth.....?' I started but she quickly cut me short.
' Ever since yesterday, my friend, I've given the matter thought.
I'll hang the portrait on my wall and, should I die one day,
Rosy Coutts will no doubt call and no doubt she will stay!
She'll see the jewels that you paint! She'll want, them I'll be bound!
And wont I have the last laugh!
She'll discover they can't be found!'