Did you know you have two voices
(If you have a voice at all!)?
And you have to combine the two of them
To make a yodelling call.
One is called the Head Voice
You sing notes from your head.
The other is your Chest Voice;
It comes from the chest instead.
You move between the two of them
Yet you only sing one note;
Head, chest, head, chest, head, chest, head
Emerges from your throat.
A yodelling tune is best heard
Where mountain peaks are high;
The sounds make a bouncing echo
Resounding through the sky.
Herdsmen in the Alps would 'speak'
To others in this way;
And others on a far-off peak
Would hear what they had to 'say'.
Now Country-and-Western music
Involves yodelling, we find,
So yodelling is singing
Of a very rural kind.
* 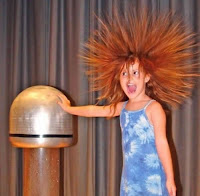 We've all had the experience, when the weather's dry,
Of reaching to  touch an object and then jumping up sky high!
An electric shock has zapped us! But that shouldn't cause a flurry.
Although it gives us quite a start, we really shouldn't worry.
The little girl in the shot above is really having fun.
Her red hair's standing up on end! She doesn't even run!
Everything's made from atoms including you and me
And inside are protons and neutrons held together electrically.
Positive and negative attract and all is well
Everything is steady, everything seems to gel
Until an imbalance happens! Then we notice with alarm
That some electricity escapes.... not enough to do us harm.
Electricity escaping is the cause of the wayward hair!
But there's only enough to tickle her so she doesn't really care!
Static electricity isn't really still, it moves!
As hair that's standing up on end very surely proves.
*