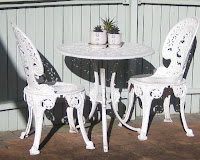 And do they have a conversation
As they sit here in the sun?
Two old friends who've been together
Since their working lives were begun?
Do they discuss the sitters
When they get up to leave,
And when some go never to return
Do the two seats ever grieve?
'We haven't seen Sarah lately;
I wonder if she's been ill.'
(Sarah never did return
And the seats are waiting still.)
Seeing them sitting face to face
Casting shadows on the fence
Gives them a strangely human air.
But they probably talk more sense!
*

Yes, I like the sentiment here! But then, I do feel I am better off than many, and wonder if I would feel the same way if something irrevocable changed....

A fine old tree - and a worthy rhyme!