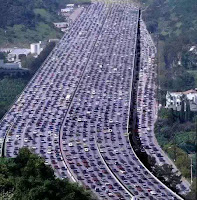 Is this the shape of things to come?
Even now the constant traffic hum
Tends to drown out thoughts and words,
And even the singing of the birds!
When Henry Ford dreamed-up the car
He never looked ahead this far.
He never visualised we would settle
Into a morass of metal!
I'm lucky; living where I am
I rarely see a traffic jam,
But on the news I watch each night
A helicopter, in its flight,
Beams back pictures that aren't pretty.....
Cars all leaving Sydney city .
Bottle-necks and deviations
Accidents and complications;
Not to mention noxious gases
Being breathed-in by the masses.
Of course I like to drive in style
Covering many a motoring mile,
But how I wish the roads were clear
And other cars would disappear!
*
----------------------------------------------------------------------------

Scouts and Guides from every nation
Meet to have a celebration.
This is called a Jamboree;
A word well-known to you and me.
But when it appeared in 1920
There were question-marks a-plenty!
What on earth was this strange word
One that nobody had heard?
Baden-Powell, the movement's founder,
(Who some consider 'rather a bounder')
Had lived in Africa for years,
Learning Swahili, it appears.
Jambo's a word that is a greeting;
Africans say it upon meeting.
But we go to another continent
To find out what the 'ee' bit meant.
We learn the Australian Aborigine
Has a good word 'corroboree';
This means a gathering of folks,
To drink and laugh and tell old jokes.
Put together the two words say
'Hallo-Meeting' in a sort of way.
All very suitable, you see,
For a Boy Scout Jamboree.
*
--------------------------------------------------------------------
PS
A belated Happy Birthday to David, with whom we celebrated on Thursday! 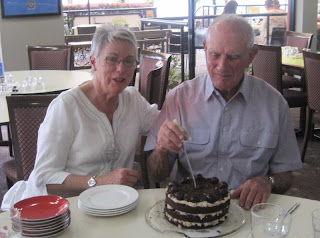 Brilliant (both of them)!!

That is quite a traffic am and I'm sure Ford had no idea.

I love the scout jamborees, too.