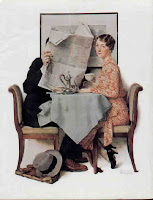 The tragi-comedy that is life is captured here so well.
That's Heaven flying out the window; this breakfast table is Hell.
This must be the nineteen-thirties, judging by dress and hair,
And, in the nineteen-thirties, life was far from fair.
She married because...... she married. Wasn't that what everyone did?
And women, in the nineteen-thirties, just did as they were bid.
A little girl at sixteen, a wife at seventeen.
Ask her about education. Ask her where she's been.
And , oh, it was all so lovely, being asked to be a wife!
On a cloud of white tulle she expected to sail through a joyous life.
So much for expectations. She very quickly found
That the man of the house didn't notice her, didn't care if she was around......
Except in his bed when 'habit' soon replaced the first night of passion,
And 'hubby' became unpleasant if he didn't get his ration!
Look at her face and see 'last night'; it's written there quite clearly.
She desired the title of 'Mrs' but she's paying for it dearly.
So now he's reading the paper; men need to follow the news.
We know he'll never discuss things, or ask her for her views.
He'll be off in a moment after, maybe, a peck on the cheek,
And she'll stand and watch his departing back, feeling unsure and meek.
And then she'll do the ironing, and even make a cake;
And she'll never dream of admitting that, maybe, she's made a mistake.
Why should she? For she is a woman, and this is the life she's got.
Yes, she is a woman, and her's is a woman's lot.
*
Mr Rockwell, when you painted this, what was in your mind?
If you thought it merely funny, how could you be so unkind?
* 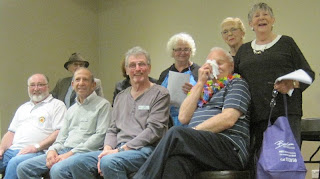 The Squire, Dan the Librarian, Mother and the spotless Heroine.

I am a kicky wicky! I love your cute poem!

when I am not in the mood, the husband better not call me kicky wicky even though Shakespear coin the word.

Yes, women and children have taken quite a beating in days gone by. Now we have a "few" more rights. lol

Interesting word which I never heard before..not too fond of the connotation of kicky-wicky.
the other poem really makes me rather sad. The 1930's didn't sound like good years for the Kicky-Wicky.

Kicky-wicky I am! And I am so glad I did not marry in the 30s! My lot has been so much better than women who married then.

Hmmmm, am not sure if I am or not lol.

Must be one of the rare occasions when Will chose a dud. Thank goodness the 30s are long gone.
Joy - ABC Team

Definitely NOT a kicky wicky. Don't think I ever would be. I'm too independent -- actually too much like my father. My mother put up with way too many put-downs and there was I listening and thinking I would never put up with that!

As always, your clever lines hit the mark♫