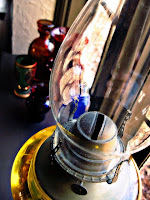 MAGPIE TALES
http://magpietales.blogspot.com/2010/09/mag-34.html
supplied the picture of the oil lamp.

A TRUE STORY
Olive was my father's sister; she lived in the West Country,
And my father often told this quite macabre tale to me.
It happened in the eighteen-nineties, when Olive was at school,
And when doing chores was a common part of childhood, as a rule.
Her parents had a little shop, selling oil, a useful thing,
And Olive used to tour the town knocking doors and delivering.
All lighting was done by oil lamps, and so the trade was brisk,
And Babbacombe was a peaceful place so there was little risk.
Miss Emma Keyse lived all alone in a cottage by the sea;
Her house was down a steep cliff path, which was often slippery.

Olive knew Miss Keyes quite well in a mistress/servant way,
For the girl was often delivering oil and passing the time of day.
Imagine the horror that she felt when she heard Miss Keyes was dead!
Her throat had been cut and she had died from a terrible blow to the head.
John Lee, one of her servants, was soon accused of the crime,
And it caused great consternation in Babbacombe, at the time. 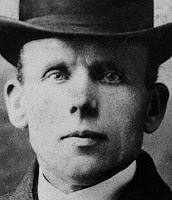 But this isn't the end of this sorry tale, for justice had to be done
And events surrounding the hanging, mystified everyone!
Three times they tried to hang John Lee, but the trap-door failed each time,
While, all the while, he vowed that he was innocent of the crime.
After three attempts the authorities said that a pardon was a must;
God clearly thought Lee was innocent so the law, too, must be just.
So Lee walked free, to write a book and make money from his story!
The criminal was never found. Lee covered himself in glory.
He became a minor celebrity,in his praise the people sang.
'The great John Lee of Babbacombe! The man they couldn't hang.'
And what of my Aunt Olive, well, no-one recalls her name,
But, just for an instant, in a way, Aunt Olive was touched by fame! 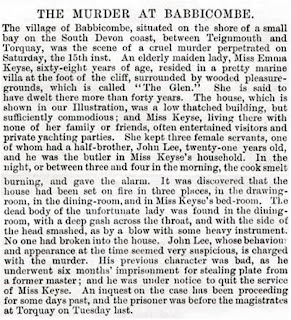 WICKED WASP!
(For teaching the 'w' sound.)
A wasp flew in my window and wandered down my wall.
It waved a wing
And wagged a sting
And I didn't like that wasp at all!
I wished I were a witch so I could make it disappear,
But it came zoom
Across the room
And stung me on my ear!
With weeping and with wailing
I watched that wasp go by.
It winked at me
Quite wickedly
And I never even wondered why!
My ear was red and burning where the wasp had had his fun,
But it swooped back
With a new attack
And bit the other one!
*
Posted by Rinkly Rimes at 6:06 PM

What a dark tale the lamp told us, and I absolutely loved the Wicked Wasp (as it did not sting me, heh heh!)

and, the story, well, wow! WOW! i like reading stories such as this though it did not have a happy ending....

Interesting story of a long-ago crime.

What a story?You must be inspired when you read it in news...well you made them famous again

I lived next door, in Cornwall, for fifteen years and, I found your Babbacombe story very entertaining.

It's amazing the tales we hear from our past. It's nice that you can record this for the future generations.

Ohmigosh, what an unusual piece of personal history. Haunting.

What an interesting story and well crafted poem to accompany. True storys always make for the best work. Thank you for sharing this.

Yes, it’s a macabre tale whose words then touched Olive. The story’s life lives on through the breath of Olive and the wicked wasp whose presence reads of Miss Emma Keyse’s life once lived in a cottage by the sea.

Suzanne McMillen-Fallon, Published Author (year-end 2010 or early 2011)
www.strategicbookpublishing.com/Mommy’s Writings: Mommy, would you like a sandwich?

Can't trust wasps any more than some people! Lol :)

Love the rhythm and humor of the 'Wicked Wasp' ... probably even more after such a sad story before.

I'm thrilled, this looks like it is allowing me to comment. Have had difficulty here over the last couple of weeks.

Whoa! That is sm story.

very interesting, entertaining story
and that wasp poem was pretty sharp too :)

I agree, about the fingernail question, Brenda Bryant. Whoever makes up such questions must see life in a different way; at least one would think so. But then again, this is my answer to the question, if there’s an answer to be had. One would be a fingernail’s length taller, if one hadn’t cut their fingernails. Think about this answer for the person who thought up this question. Have a great day, Brenda.

Suzanne McMillen-Fallon, Published Author (early 2011)
www.strategicbookpublishing.com/Mommy’s Writings: Mommy, would you like a sandwich?

What an intriguing story! And what makes it even better is that it is true.

What an intriguing story, Brenda. I can see why the prompt brought it to mind!

Brenda just love your poem, and the story is quite griping...love how you pull so much together for a concept or prompt! Great writing Brenda! :-)

wow...what a story and a great telling of it too!

Your poetry never fails to please. Another great tale from the prompt. Wouldn't it be great if most newspaper articles had to rhym....?

great grisly story and the Wasp poem was wickedly wonderful!