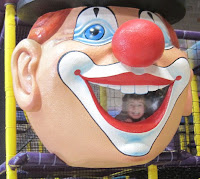 TASTY MORSEL!
A clown went and swallowed our Max!
And it isn't as though we were lax!
We were drinking our coffee (oh how much a sip meant!)
While Max was off playing on all the equipment!
We lingered a while over slices of cake,
But we didn't neglect the child! For heavens sake!
He was running around! He was shouting 'Yippee!'
And he was enjoying his life at age three!
We started to chat when the titbits were downed
Saying 'Isn't it great to see Max running round'.
Then we looked at the children that swooped down the slide,
And not one was Max! So he'd run off to hide!
It was then that we saw him, not west, north or south,
But right there inside an enormous red mouth!
'Please don't eat our Maxie!' we begged of the clown,
'Please don't chew him and bite him and swallow him down!
So the big clown relented and Maxie got free.
A day of adventure, I think you'll agree!
*
--------------------------------------------------------------------

ALL WASHED UP!
From one of my melodramas. Sing to the melody of' 'Love is a Many Splendoured Thing.'
Once, on a high and stormy sea,/ We were tossing up and down before our calamity./ There were clouds like purple pillows/ And great high-rising billows./ Then came the wind, like some monstrosity!/ Waves, that came washing on the decks,/ Soon were rising, rising, rising until they reached our necks!/ Then the power of nature did it's worst and drove us right aground!/ Disaster!/ For everyone was drowned./
Once, on a rough and sandy shore,/ I came-to and found that I was safe from the oceans roar!/ There were bodies lying near me!/ I called but none could hear me,/ And I was somewhere I'd not been before/ So, I was saved, in some strange way,/ And I lived to walk and talkand laugh for another day./ But, although I seemed quite normal, I felt oddly vague and dazed!/ Disaster!/ My past had been erased!/
*
----------------------------------------------------------------
P.S. 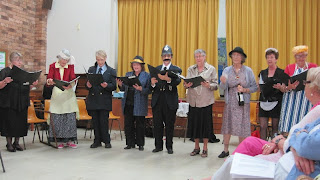 We performed 'Jewelled Jeopardy' for our own club today. I felt quite nervous as I felt some people would be hyper-critical. I even forgot my lines at the start because I felt insecure. But it turned out to be a very successful show.
Posted by Rinkly Rimes at 6:12 AM

Very cute verse about Max! Perfect for the photo.

I'm glad the show was a success!

I think that clown picture is just precious. :)

What a fun shot and verse. very clever.

Love the clown nose. For some reason, I get images of clowns a lot.

You always post the most clever writing to match your photos. Or is it the other way around? ;-)